With the last legal challenge exhausted, the future of HFCs remains unclear

For the last year, the HVACR industry has held its breath, waiting to hear whether the U.S. Supreme Court — at the request of Honeywell, Chemours, and the Natural Resources Defense Council (NRDC) — would revisit the 2017 decision by the D.C. Circuit Court of Appeals to block the Environmental Protection Agency’s (EPA’s) ban on HFCs through its Significant New Alternatives Policy (SNAP) program. The Court of Appeals had ruled in favor of Arkema and Mexichem Fluor, which had contended that the program was designed only to address ozone-depleting substances, and while HFCs are suspected of contributing to climate change, they do not deplete the ozone layer.

In October, the Supreme Court decided not to review the case, leaving in place the 2017 ruling, which means for now, the use of high-GWP refrigerants, such as R-404A and R-410A, remains legal. However, that may change, as the EPA is considering a new policy regarding the use of HFCs, and of course, the U.S. could ratify the Kigali Amendment, which calls for a global phasedown of HFCs by more than 80 percent over the next 30 years starting in January 2019. For now, though, the HVACR industry remains in limbo, with end users unsure about which refrigerants will be legal in the future, while states such as California and New York are attempting to pass their own regulations to phase down HFCs.

While Honeywell, Chemours, and the NRDC expressed disappointment regarding the Supreme Court decision, they are firm in their resolve to move forward on phasing down HFCs. A Honeywell spokesperson noted, “While we are disappointed by the Supreme Court’s decision not to hear our appeal of the SNAP ruling, there is growing momentum for the phaseout of HFCs in favor of safer, environmentally preferable solutions. This is illustrated most recently in the U.S. by commitments from California, Connecticut, New York, and Maryland.” 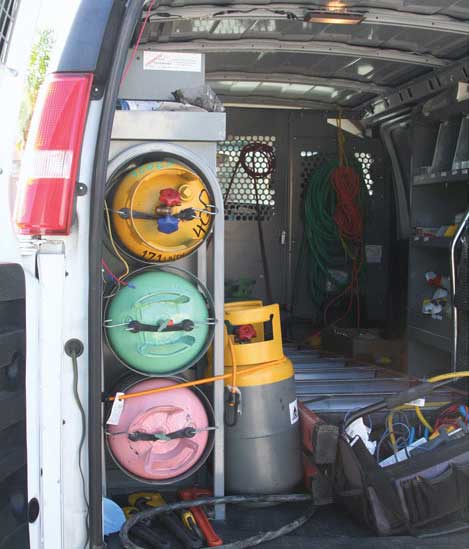 GREEN LIGHT ON LEGAL USE: The court decision means that for now, the use of high-GWP refrigerants remains legal.

Joe Martinko, global business director of Opteon™, Chemours, agreed, stating, “We believe the court missed an opportunity to continue the original intent of SNAP to direct the EPA to replace ozone-depleting substances with comparatively safer alternatives. However, with significant industry and environmental community support, there is continued momentum in the states to adopt SNAP rules 20 and 21 to continue the momentum toward phasing down the use of high-GWP HFCs.”

Arkema’s Allen Karpman, director of government affairs, Fluorochemicals Americas, said that any effort to require the use of lower-GWP alternatives should be holistic and should give regulated persons the flexibility to pick the best products for an efficient and safe transition in a free market environment.

“Arkema continues to be a strong and active supporter of policies and initiatives that support reductions in HFC use as embodied by the Kigali Amendment to the Montreal Protocol that provide sufficient market flexibility and that avoid creating a patchwork of divergent regulations,” said Karpman. “We believe the development and use of HFOs and lower-GWP HFCs will play an important role in achieving that goal.”

“We prefer, and have always preferred, a federal (and indeed a global) phasedown plan for HFCs,” said Dietz. “If states are going to act in the absence of a federal plan, which is certainly their right, we prefer that the individual state plans are coordinated so that the phasedown percentages and schedules are aligned.”

While several states are already committing to an HFC phasedown, most are waiting to hear how the EPA plans to regulate these refrigerants going forward. An EPA spokesperson noted that the organization is currently addressing the aspects of the court’s decision.

“With regards to the SNAP program, this past April, EPA issued guidance on the 2015 Rule in response to the court decision,” said the spokesperson. “To address the vacatur, EPA would not apply the HFC listings before completing a rulemaking addressing the remand; to address the remand, EPA would move forward with a notice-and-comment rulemaking. EPA held a broad stakeholder meeting in May and seven sector-specific workshops in June and July. EPA is developing and anticipates issuing a proposed rule addressing the remand in early 2019.”

At the meeting in May, as well as the sector-specific workshops in June and July, the EPA spokesperson noted that stakeholders voiced a variety of comments and suggestions concerning the continued global transition from ozone-depleting substances and the SNAP program’s role with listing alternatives. The EPA is considering these and other comments as it develops its proposed rule.

According to Dietz, every stakeholder present at those meetings expressed support for the EPA’s alignment of its goals with that of the Kigali Amendment. Despite this, he anticipates that the notice of proposed rulemaking will likely dramatically curtail EPA’s participation and influence in HFC policy.

“We believe the phasedown of HFCs is inevitable, which is why we have advocated for a global plan while at the same time, performing the necessary research to ensure suitable replacement refrigerants for each application,” said Dietz.

AHRI’s refrigerant research program, called the Low-GWP Alternative Refrigerants Evaluation Program, began in 2011 and is designed to research and evaluate a host of potential alternative refrigerants in many different applications. Rather than promoting one over another for a given application, explained Dietz, the program simply presents the research and evaluation findings to manufacturers, who can then decide which are appropriate for their specific applications.

Chemours supports the universal ratification of the Kigali Amendment, believing it is the best option to regulate high-GWP HFCs. However, Martinko noted that the company would support adoption of standard regulations in individual states and municipalities that are moving forward with regulations as the preferred alternative for the HVACR industry.

It is clear that many countries and regions around the world are moving away from HFCs to safer, more efficient and environmentally preferable offerings, including HFOs, noted the Honeywell spokesperson. As a result, refrigerant manufacturers are partnering with equipment manufacturers to develop global platform solutions to ensure the world has access to “solutions that meet increasingly stringent, societal-led energy efficiency and safety requirements.”

Arkema, too, plans to continue offering a portfolio that satisfies customer needs and offers a gradual transition to lower-GWP materials, noted Karpman, so that customers are able to maximize the efficiency and safety concerns in their selection of refrigerants compliant with current regulations.

While federal HFC regulations will likely remain in flux for some time, most refrigerant and equipment manufacturers are planning on a phasedown. What that phasedown schedule will look like is anyone’s guess, although most seem to favor the guidelines offered in the Kigali Amendment.

As Dietz noted, “Our industry has long advocated for a global phasedown structure for HFCs, and that is provided by the Kigali Amendment. The reason we have wanted one structure is to avoid a global patchwork of differing regulations that drive up costs for manufacturers and consumers alike.”