Don’t Let Side HVAC Jobs Lead to No Jobs

What to do to avoid losing business to your own techs

It’s one thing to fix mom’s hot water heater. It’s a totally different thing to be picking up work from her next-door neighbor or handing out business cards for side jobs off the clock.

Moonlighting by technicians can be a huge headache for contractors. Fortunately, when it comes to side jobs for family and friends, the savvy contractor has the ability to turn the issue on its head. With a bit of creativity, a clear policy on what kinds of jobs can be done for free or a reduced price can turn a tense situation into a win-win agreement that’s fair to all parties involved: customer, technician, and business alike.

At Pape Air Conditioning and Heating Service Co. in DeSoto, Texas, there’s a clear line: When you’re asked to work “for free,” you work for free — no pay.

Stephen Pape is the company’s general manager and a board member at ACCA.

“While allowing employees the freedom to work on their own HVACR systems and also work on the systems of family members, neighbors, friends, and friends of friends might seem like a good idea at first, there are some dangers to consider,” he said. “The last thing we want to do is turn a loyal employee into a competitor.”

And the company makes it very clear that while there’s no problem with benevolent work, competitors are not welcome on the payroll.

“It’s a gray area; you’re kind of opening a can of worms if you let them make money on the side,” Pape said. “You don’t want to say ‘you’ve gotta pay us to work on your own unit or your mother’s,’ but at the same time, we want to be fair to the employees as well as the company.”

That’s not to say that side work isn’t allowed.

Pape Air employs five technicians, and most of them have replaced their parents’ equipment, their siblings’ equipment, and done repairs at their churches. To keep everything above-board, both with the company and with governmental regulations, Pape Air has a three-part policy for getting a side project approved:

Once, a technician came to Pape and said he wanted to do some work on the side. So Pape asked him how he’d determine whose customer was whose. The tech told him, “If the next-door neighbor walks over while I’m outside working at the unit, I would just give him a card and call him after hours.” That wasn’t the answer Pape wanted, so the two parted ways.

“There are customers all over the place asking the technicians what they’d do the work for,” he said. “You really want guys who’ll say ‘I won’t do that.’ We have very senior technicians; they use [the policy] all the time to say they can’t work for the next-door neighbor.”

John Betlem Heating & Cooling Inc. in Rochester, New York, discourages side jobs by offering a friends and family rewards program as a job perk. It’s something they committed to in writing 16 or 17 years ago.

“We did so for two reasons,” said Jim Lytle, fleet and safety manager. “One was to add another benefit for working for our company. And two was to discourage folks from the infamous side job, so that there’d be a mechanism that everyone could take advantage of, instead of trying to slide something through.”

The program has three tiers of discounts, designed to provide employees (including office staff) the opportunity to benefit from their employer’s services.

The first tier, for employees themselves, is a 25 to 35 percent discount. Second-tier is the employee’s immediate family: mother, father, brother, sister, and kids. They get 15 to 20 percent off. Friends are in the third tier, and they get a 10 percent discount. Work is also discounted more heavily during the traditionally slower parts of the year — in this case, spring and fall, in between the heating and cooling seasons — to drive business toward the months when work is lighter.

All work is scheduled in advance, performed during business hours, and can be assigned to any crew or technician working for the 50-person company.

Payment is run through the company books, but as an added incentive, the company extends a “spiff” (sales performance incentive) to the employee who brings in new equipment sales through purchases by friends and family.

“The idea is to bring new business into the company,” Lytle said, “and hopefully, bring them in for life.”

“Allowing work on the side actually puts the employee in a precarious position where it is more difficult to say ‘no’ to people wanting special favors or discounts. Creating a clear line ... allows our employees time to rest and/or enjoy activities away from work.”
— Stephen Pape, general manager,
Air Conditioning and Heating
Service Co., DeSoto, Texas

At Bowman Heating and Air Inc. in Petal, Mississippi, Zac Bowman, general manager, is in the midst of putting a friends and family policy together. He’s hoping it will bring some clarity to an ongoing issue.

“We’ve got three techs — four, including me — and we’ve had some issues with some side working,” Bowman said.

One tech in particular was doing a lot of work on his own.

“It got to the point where it was getting worse; we felt like he was using our time and money for his business,” Bowman said. “We wanted to have something where he could help them out and make a little money, but it was costing us money.”

To keep the discount pool manageable, Bowman is planning to have each of his employees make a “friends and family” list of 25 people, who would then be eligible for a 15 percent discount on service and service agreements for the year. Employees would be able to either update their lists at the beginning of each year or add people as the year progressed, as long as they stayed within 25 customers total: no swapping them out after a job is done.

Jobs would also be run through the office, and parts used on friends and family jobs would be accounted for, something that’s also been an issue, he said.

Most of the employees are on board with the new policy.

“They all have different employment backgrounds,” Bowman explained. “The oldest employee, he’s from a different generation. He understands that there’s rules, handbooks, things you have to do because you work there.”

Another tech has a background working with larger companies, so he’s used to complying with corporate policy, even though Bowman’s Heating and Air is a family business. Only one objected, saying that he knows more than 25 people.

“I know that for it to be beneficial, everybody needs to be happy and on board for it to work,” Bowman said. “But we can’t give out free jobs all the time. As we’ve grown, we’ve had to have more rules and procedures.”

Ultimately, he said, it’s up to the company: “You work for us, this is what you’re going to do.”

Having a friends and family discount policy in place has benefits beyond helping the company keep a handle on finances, parts used, and hours worked.

“Allowing work on the side actually puts the employee in a precarious position where it is more difficult to say ‘no’ to people wanting special favors or discounts,” said Pape. “Creating a clear line for the employee to not cross actually provides them with the necessary backing to say ‘no’ to freeloaders and allows our employees time to rest and/or enjoy activities away from work. It works out very well, and there’s no confusion.”

Bowman agreed, saying that while it saves the company money, it also saves the techs from having to do work when they really don’t feel like it because they’re tired.

“Sometimes you need to help your family out, getting them out of a jam, and this way you can do it through the business, not after hours,” he said.

Requiring discounted or charity jobs to be done for free really cuts down on the number of requests to do that kind of work, Lytle said — and often results in more business for the company as well.

“A lot of times, they’ll want to come back and run it through the business because they’ll get paid for it,” he said. 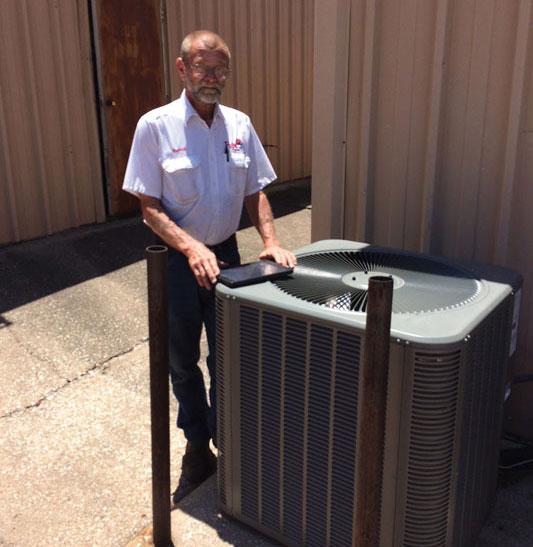 KEEP IT IN THE COMPANY: David Murphy, an employee at Pape Air, purchased a system through the company for his home and has also done systems for family members through their discount program.

David Murphy, an employee at Pape Air, has purchased a system through the company for his home and also has done systems for family members through their discount program.

“I think employees should do work through the company at a reduced rate,” he said. “Family will get better quality work.”

At the end of the day, he added, business is still business — regardless of who’s having the work done.

“Everybody always talks about their neighbor or their uncle or the guy who does it on the side; they can always deliver some fantastically cheap service and product, and I suppose folks can find that opportunity,” Lytle said. “But it comes with ‘the fireman’s not always available when you need him’-type warranties, that kind of thing.”

Going through the company gives both sides the full benefit of the warranties. Indeed, John Betlem Heating & Cooling lists the friends and family discount in its handbook under employee benefits.

“Think of it as a reward,” said Lytle. “That’s the way we present it to employees. It’s kind of like shopping at the company store, so to speak. We believe this is a benefit to all employees and a deterrent to the employee who wishes to utilize his or her talents on the side.”

Like any discount, a good friends and family program should have clearly defined boundaries, Lytle cautioned.

“You’ve got to be careful how you present it, so it’s not just another 10 percent off for everyone in the company to give stuff away,” he said. “Commit it to writing, like anything else, so people can offer it in hand if you need to. You’ve got to make sure you’re priced right up front, too, so if you’re offering a discount, the worst case is you break even. Twenty percent off of a $10,000 system? That’s some serious change.”

Ultimately, it’s how the policy is handled, as much as the discount it provides, that will determine its success.

“Everybody wants to help their friends and family out,” said Bowman. “It’s just that there’s certain ways you need to be doing it.”

Carrier Agreement to Save 1,100 US Jobs