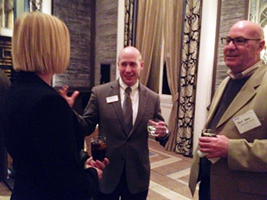 NEW YORK — Despite the snow, the 2014 AHR Expo is off and running. Members from the heating and cooling industry gathered this morning to get a first look at new products, technologies, and solutions in a hands-on fashion. Preceding the doors opening to the public, manufacturers and exhibitors held special events at their booths including press conferences and breakfasts. Among the multiple events, The NEWS provided coffee and donuts at its booth, #547.

Before the AHR Expo began, HARDI held its annual Icebreaker last night. Distributor and supplier members gathered at the Waldorf Astoria to talk to Royce Henderson, the newly-elected president of HARDI. An open bar and refreshments topped off the evening of networking.

Temperatures are dropping and the snow is falling, but things are just beginning to heat up at the AHR Expo. Stay tuned for more updates and check out the Distribution Center Twitter feed for pictures and announcements from the show floor.