2014 could be a very interesting year for HARDI members that purchase sheet metal or otherwise keep track of the steel marketplace.

That was the opinion of experts who spoke yesterday at the Sheet Metal/Air Handling Materials Committee meeting. The Sunday afternoon session was very full, a fact that committee said they appreciated.

David Boggs, chairman of the committee, reminded attendees that the price of metal is constantly in flux.

“Steel is a commodity,” Boggs said. “It goes up and down, just like any commodity.” 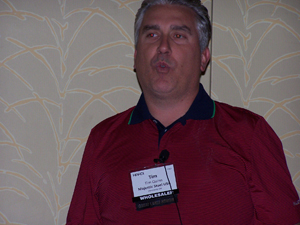 That point was underscored by Tim Quinn of Majestic Steel USA. In his speech, Quinn told attendees that several factors are likely to affect the prices they pay for materials. One is the amount of steel that mills are processing.

“Inventory levels today are very low,” he said, adding that may mean some mills are going to soon announce price increases.

Another is that a number of mills now have new executives in place.

“There has been a major shift in leadership at the mill level,” he said.

One issue that has constantly been in the news is the allegations of “dumping” of steel by Chinese manufacturers at prices below its manufacturing costs. Quinn compared it to the steroids scandals in sports during in the last decade, in that the public seems to no longer be shocked by the allegations.

Allegations of dumping by Asian steelmakers are similarly viewed by the marketplace, he said.

“The import market is not going to destroy the domestic market,” Quinn said. “It will influence it.”

He recommended buyers invest in zinc testers and even mobile applications that allow the testing of metal to ensure its gauge and metallurgy is as advertised.

“Let’s get everybody aware, let’s do the right thing so together we can learn and we can grow,” Quinn said.