This website requires certain cookies to work and uses other cookies to help you have the best experience. By visiting this website, certain cookies have already been set, which you may delete and block. By closing this message or continuing to use our site, you agree to the use of cookies. Visit our updated privacy and cookie policy to learn more.
Home » One HVAC Contracting Business, Six Generations
HVAC Residential MarketHVAC Light Commercial MarketHVAC Commercial Market

What does it take for a family business to last 125-plus years and six generations?

According to Jim Batson, it’s customer service, integrity, and a willingness to change with the times.

And he should know. Batson is the owner and CEO of H.C. Blake Co. Inc., a plumbing, heating, cooling, and electrical contractor located in Huntsville, Alabama. He’s the sixth generation who’s worked at the company.

“I started when I was 12,” he said. “My grandfather was the owner, my uncle was head project manager, and my mother was basically the CSR dispatch. I did everything: I rode with service techs, went on construction jobs, I dug ditches … I dug ditches from age 12 to 24.”

Batson has headed the company since 2009, when he bought it from his uncle.

“No one’s been given the business: Everyone’s had to buy the business,” he said. “That’s how the business has kept thriving. Everyone works for what they get. We get up every morning, and we work.”

H.C. Blake Co. was founded in 1884 when B.W. Blake came to Huntsville as district superintendent for the Southern Railroad and installed gas lights around the square. His two sons, Hall and Jim, also joined the business: They’re Batson’s great-great-great-great uncles. Back then, the company specialized in gas lines for lights and cedar water lines for water distribution. Then they went into hot-water boilers, electrical, “and it just evolved from that.”

When Batson purchased the company, its work was 90 percent commercial construction and 10 percent residential service. It was also the year the market collapsed. Batson knew he’d have to adapt.

“I knew I had to change my business and my culture,” he said. “So I got on an airplane and traveled all over the country, going to different service companies and seeing best practices.”

Now, the company does 50 percent commercial construction and 50 percent retail service. They employ 125 people and have about 60 fleet vehicles.

“And we do anything from putting a toilet, an outlet, a unit in your house to designing buildings or a Class 100 cleanroom,” he said.

On the company website, there’s a photo of a horse and buggy outside a storefront with the words “H.C. BLAKE PLUMBING” lettered on the windows. That was their service truck in the late 1800s and early 1900s.

“That shows our sustainability,” Batson said.

And sustainability is something he’s been working on ever since he took over. It’s something that’s been baked into the company’s DNA. 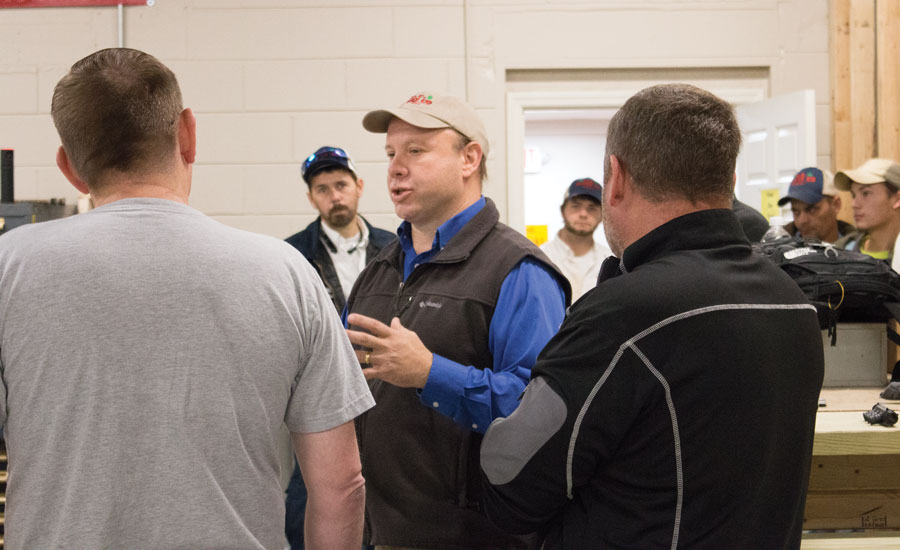 LEARNING HOW: The company does its own in-house workforce training and is opening a new facility, including a model home, especially for that purpose.

“When Huntsville was booming in the 1950s, my grandfather employed about 500 people,” he said.

That was during the space race and the construction of Redstone Arsenal; H.C. Blake Co. employed a lot of the workers who built it. After that, employment dropped to about 40 to 60, until 2009.

“Once we changed culture to the service and construction industry, we pretty much doubled that size,” Batson said. “It’s been strategic growth. We live very frugally, we try to keep a low overhead and maintain high integrity and product.”

“Customer service and trust are key factors in all of the business we do: building relationships, keeping the same customers,” she said.

The shift came in figuring out how to best orient service toward individuals, and the company went all-in.

“We immediately began training and developing a whole-home approach: training for customer engagement, follow-up, always making sure our customers were 100 percent happy with our calls,” she said. “We started with techs training daily, sometimes weekly. We tried to really match the guys with their inclinations: Were they better suited for construction, repair, or talking to customers about their whole-house needs?”

But what it really comes down to is drive, said Fair.

“We understand our customers and what their needs are,” she said. “We approach it like a battle every day: Are we ready for tomorrow? Have we followed up with our customers? Are we ready to go out in the field?”

Due to recent growth, the company — which has been in the same building for the past 50 years — is relocating to a larger, 15,000-square-foot facility. They’ll also have a separate facility for training new employees, complete with a computer lab, a training room, and a model house for them to practice working on.

“They can actually get underneath and can work within the walls,” Fair said. “All of our HVAC units are on rollers, so they can look at facilities.”

With in-house workforce training, Batson is addressing head-on what he feels is one of the biggest challenges to the industry: not a worker shortage, but the perception that one exists.

“There’s plenty of workers, but you have to train them,” he said.

In particular, he pointed to youth and young people.

“People always say that millennials won’t work,” he said. “I probably have 30 workers under 25. They’re the hardest workers I’ve seen.”

Batson and his employees are constantly recruiting, both in-person through friends and job fairs and online via Craigslist, Facebook, and other social media sites. Different ways of recruiting get different people, Fair said. They also introduce nontraditional recruiting terminologies into job descriptions, based on the key skills that the company is targeting.

“We call dispatchers ‘opportunity coordinators’ because we’re targeting people looking for the opportunity for customer service,” she said. “Salespeople are ‘project specialists’ because we’re really looking at projects, such as insulation or crawl space encapsulation; it’s more than just installing a/c.”

Hiring motivated employees is the first step; treating them right to keep them with the company long-term is the second. 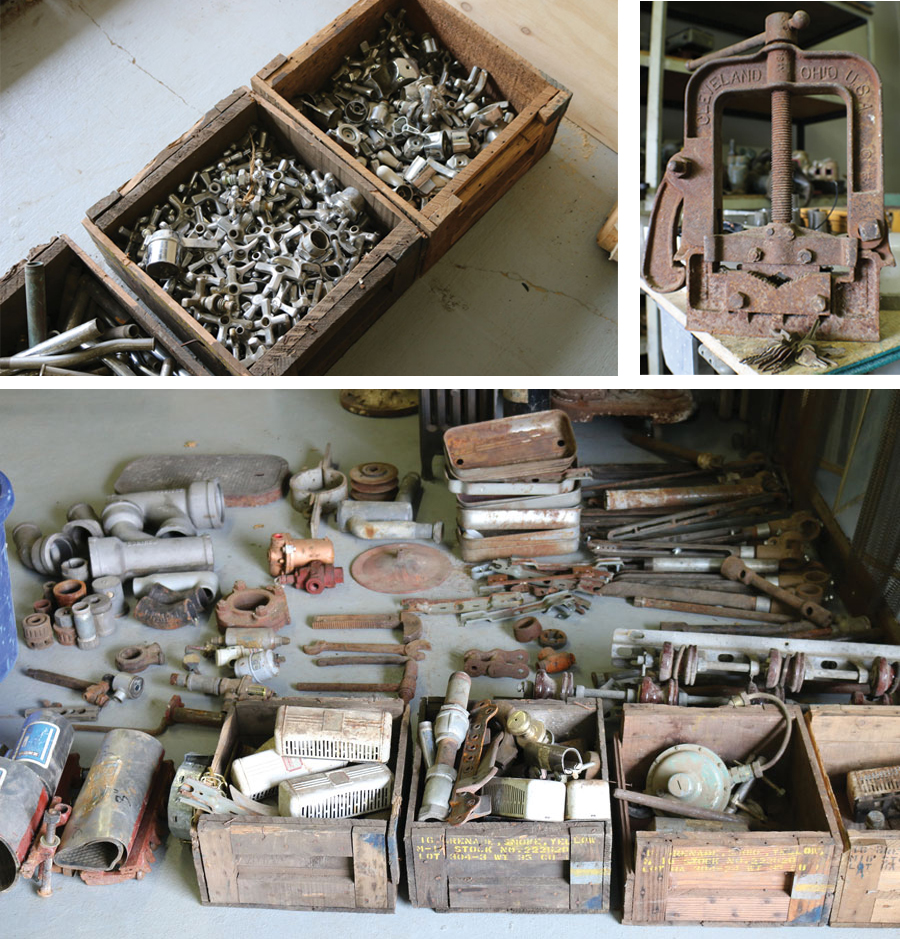 HVAC HISTORY: As one of the oldest industry firms in the area, H.C. Blake Co. Inc. is planning to create a museum of HVAC, plumbing, and electrical equipment and tools that have been used throughout the years.

“We’re not a hire-and-fire company,” Batson said. “Our workers work 40 hours a week even during the slowdown. We have never really laid off anybody.

In addition to being a member of Service Roundtable and Associated Builders and Contractors Inc. (ABC), H.C. Blake Co. is a member of a lot of local charitable groups.

As one of the oldest industry professionals in the area, H.C. Blake Co. Inc. is planning to share that heritage with the community by creating a museum of HVAC, plumbing, and electrical equipment and tools that have been used throughout the years.

“They’re great guys,” said Battle. “They’re one of the companies that’s kind of the foundation block that Huntsville was built on. You think of the HVAC, air, plumbing, mechanical business: 125 years ago, it was just evolving. They’ve gone from ‘evolving’ to one of our larger employers in the mechanical/plumbing industry in northern Alabama. They’ve been doing some innovative practices, doing their own workforce training … they’ve added a sense of excellence to their industry that is not found anywhere else.”