This website requires certain cookies to work and uses other cookies to help you have the best experience. By visiting this website, certain cookies have already been set, which you may delete and block. By closing this message or continuing to use our site, you agree to the use of cookies. Visit our updated privacy and cookie policy to learn more.
Home » Efficiency, Comfort Propel the Condensing Unit Market Forward
HVAC Residential MarketHVAC Light Commercial MarketHVAC Commercial MarketAir ConditionersRooftop UnitsAir Handlers

Thanks to the prevalent use of online search engines like Google, consumers everywhere are becoming more educated on the products they buy, and HVAC systems are no exception. Homeowners are learning all about efficiency ratings and connectivity — and they want it. The global condensing unit market is projected to grow from an estimated $21.94 billion in 2017 to $32.47 billion by 2022, at a compound annual growth rate of 8.2 percent from 2017 to 2022, according to a report from MarketsandMarkets.

“The most significant trend we are seeing across the condensing unit category is the growth in residential new construction and add-on replacement categories,” said Pam Hoppel, senior director, product marketing, Carrier Corp. “Homeowners are choosing higher-efficiency, single-stage condensing units, including 16 SEER/13 EER and 17 SEER/13 EER, and are becoming increasingly aware that an investment in higher SEER can lead to long-term savings in lower energy bills.”

“For residential new construction, it is typically more cost-effective to use more efficient condensing units than other home efficiency upgrades, such as increased insulation, improved roof design, and window overhangs, to improve HERS scores,” she said. “This has led to more builders investing in higher efficiency systems. Utility rebate programs for higher efficiency condensing units are helping this trend in the replacement category.” 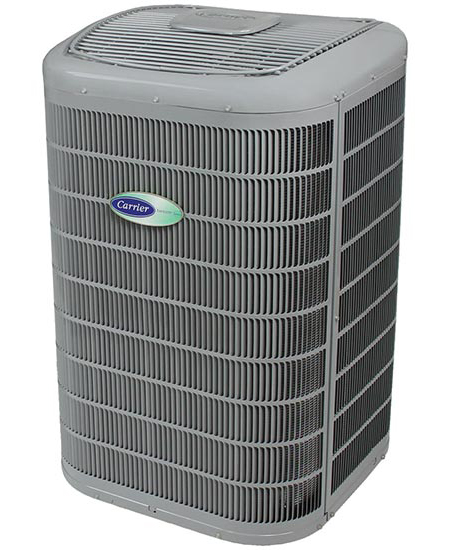 “Higher efficiency sales are trending up but are still the minority of the total sales of air conditioners,” he said.

But, despite the fact that the majority of industry sales are still in the 13 to 14 SEER range, Amy Gebrian, senior product manager, residential air conditioners and coils, Lennox Intl. Inc., believes consumers are becoming savvier about needing or wanting more comfort in their homes; they just need more education.

“It’s still king in the industry to have some of our base SEER models available; however, rebates are starting to drive more of the industry into our mid-tier level products,” she said. “We’re seeing that even in some of the new construction areas as well. Most of the OEMs have at least one product with a 20-plus SEER option. However, the strength of this trend may be determined by developing more of a consumer appetite to appreciate things like higher comfort levels and those other features that are enabled by the technologies that are found in the more efficient models, such as humidity control, low sound, and more precise temperature controls. Those are not typically found in the baseline units.”

By itsef, a lower energy bill will not drive the market to higher efficiency products.

“Education by the manufacturers to promote these added comfort features is really what is going to help drive consumer appetite for comfort and help push up the need for higher SEER levels in products,” said Gebrian. “Lennox continually evaluates new technologies to bring higher efficiencies, but it has to be in a cost effective manner, and it has to be at a level the market is ready to accept.”

“Most of the OEMs have at least one product with a 20- plus SEER option. However, the strength of this trend may be determined by developing more of a consumer appetite to appreciate things like higher comfort levels and those other features that are enabled by the technologies that are found in the more efficient models, such as humidity control, low sound, and more precise temperature controls.”

“From a technology perspective, variable-speed condensing units can operate at lower speeds yet accurately control temperature throughout the day,” he said. “It uses less energy to operate, resulting in overall lifetime savings for homeowners. Currently, this technology is used mainly in the high product tier, but Rheem believes that tightening efficiency standards will continue to drive this technology to mid and low product tiers as well.”

Michel Moreira, senior sales manager for commercial segment at Embraco, said there will always be a future requiring more efficiency and reliability.

“When we design and assemble condensing and pre-charged units, we always focus on ease of installation and serviceability to reduce the costs for our customers with these processes,” he said. “Condensing and pre-charged units can be customized depending on the cooling needs of each type of refrigerator to provide the best cost-benefit, which also provides more flexibility as well.”

According to Moreira, the potential phaseout of HFCs and the growing role of natural refrigerants in the U.S. — especially considering the use of HCs in light commercial refrigerant applications — is driving the main trends.

“Refrigerant choices influence energy efficiency in the application, while the requirements for refrigerants are about economic affordability and energy efficiency,” he said. “So there are choices every OEM needs to make, and Embraco has massive amounts of research in refrigerant options and their effects for various applications each year.

“While regulations have forced new innovations, especially with regard to refrigerants, there is an opportunity for hydrocarbons to be used more effectively in a greater number of applications, following a global trend in requests for a higher charge limit,” Moreira continued. “It could be that we see greater efficiencies earned when a single high-charge refrigerant loop needs fewer components to operate, and thus uses less energy. It could also be said that the charge limit increase debate could help countries in other parts of the world meet HFC phasedown requirements. Additionally, finding sustainable solutions is becoming more mainstream. Many retailers say that using natural refrigerants and new innovative options gives them peace of mind when it comes to running their stores.” 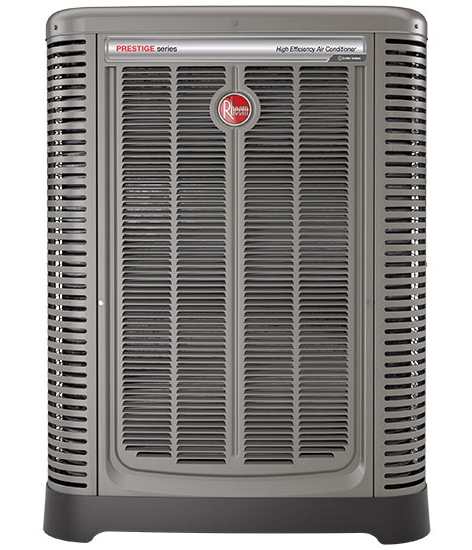 “It’s becoming essential, or just fundamental for consumers,” he said.

Homeowners are already used to features that communicate and control components and systems within their homes, including the lights, blinds, and TV, according to Gebrian.

“This is happening in their HVAC systems as well,” she said. “It’s really led to a development of communication and controllability in these systems, especially at the higher tiered product lines. And all of these developments don’t come from just the controllers alone; we’re needing to add the correct components inside of the condensers themselves to either be able to handle the communication or have sensors with the ability to tell the homeowner and dealer what is wrong with their system. As the cost of sensors comes down, and the appetite for this kind of information increases, the HVAC industry will start to see more of that. It’s already happening in the high-end market.”

On the same token, creating these new technologies also impacts the dealers and technicians who are installing them, Gebrian explained. So, in addition to becoming more innovative and technical, manufacturers like Lennox are also doing what they can to ease installation and serviceability for dealers.

“It’s almost like a two-pronged, diametrically opposed approach, where Lennox is trying to increase the innovation of the product line but also working toward simplifying it for the technicians to work with,” she added. “The emergence of diagnostics and prognostics that can communicate not only to the dealer when they’re installing the system, but also communicate with the homeowner during the product’s life cycle is becoming more prolific in many of the product lines. Lennox offers this functionality with some of our smart thermostat capabilities.”

According to Moreira, IoT solutions are impacting nearly every market right now.

“IoT has been changing the relationship between people and equipment, which, consequently, impacts different market segments,” he said. “When talking about commercial refrigeration, technology is helping companies to improve consumers’ experiences. Today, there is a new necessity for the refrigeration market: artificial intelligence.”

According to Alford, the IoT is not driving purchasing decisions, but it is more of an aftermarket purchase to enhance connectivity.

“Most research in 2018 shows that smart thermostats have been adopted by only 13 percent of households,” he said. “It’s still in the early adoption phase. While most consumers are aware of the technology, they do not see the benefit for the price. Contractors will be the ones to shape the future of IoT. It’s up to them to sell the benefits of the technology to homeowners.”

A LOOK INTO THE FUTURE

Over the next few years, Hoppel expects that continued increase of regulations, including higher minimum efficiencies, will result in an increased demand for higher efficiency systems, including variable-speed air conditioners and heat pumps. 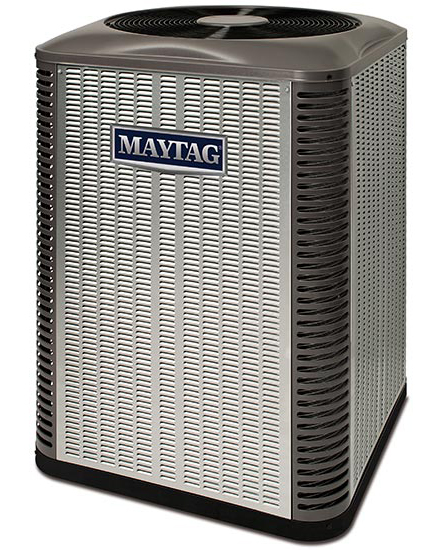 REAL TIME DATA: The Maytag PSH1BG is an inverter-driven heat pump that achieves up to 19 SEER without the need for a dedicated thermostat or special indoor unit. The outdoor unit has the intelligence to decide speed based on real-time data from the thermostat and outdoor sensors.

“In 2023, the industry will have the next level of regional standards taking place,” Gebrian said. “We’ll have higher SEER minimums, depending on where you live in the country. Additionally, there’s an impending phaseout of the refrigerant that’s used most commonly today — R-410A — that will be starting within that same time frame. Certainly, Lennox can’t wait until 2023 to react. We’ll have to make sure our products are able to meet required standards as well as consider refrigerant substitutions for R-410A, which is an active pursuit for the entire industry at the moment.”

Meanwhile, the market is strong and is expected to grow, Day noted. However, over the coming years, the Department of Energy (DOE) minimum efficiency standards will take effect, and the residential ducted and commercial industry will see a shift towards low-GWP refrigerants.

“The condensing unit market will need to adapt to the changing efficiency and alternate refrigeration standards,” he said. “In order to achieve that, the current product portfolio will need to be reassessed and redesigned. As a result, the industry will see adoption of new components and technology, which will result in more efficient systems.”

Palazzolo said the future will be a race to see how integrated the HVAC system can become.

“There will be tremendous focus on IoT,” he said. “But there will still be a race toward improving efficiency levels due to the new minimum efficiency standards from the DOE expected in 2023. All manufacturers have that in their sights. And, as energy demand on the grid becomes more and more prevalent, there will be some movement toward trying to do some things with demand response and basically operating equipment during off-peak times or even precooling homes to leverage lower utility costs at off-peak rates.”