HVACR Industry Cruising Through First Half of 2013 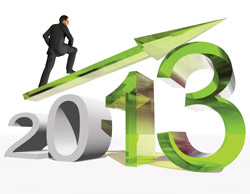 The first six months of 2013 are in the books, and HVAC contractors, distributors, and associations are reporting a flurry of activity through the first half of the year.

With research metrics rising and economic uncertainty settling, many in the industry are boasting prerecession returns heading into the second half of 2013.

Contractors Are Cashing In

Travis Smith, general manager, Sky Heating & Air Conditioning, Portland, Ore., said business has been so strong in the Pacific Northwest that he’s had to hire three new construction installers, a fourth salesperson, a new service technician, a retrofit installer, and a new trainee helper. That’s because Sky is looking at 30 percent or higher growth in revenue over the last year. A recent heat wave in his neck of the woods only added to it.

“We have not had to send any guys home early because there is not enough work,” said Smith. “This year, the challenge has been not having enough people, so we’ve been paying out a lot of overtime,” he said.

“The heat wave has already been a huge boost. We are booked between three weeks and one month out for all new construction and retrofit installs. Our service department has seen a huge spike in maintenance, as well as repairs, and we have had many weeks that we have doubled last year’s same-week volume in terms of sales.”

Smith attributes a large portion of his gains to the growing popularity of the ground-source heat pump. He said a lot of new construction and new custom homes in his area are being done with large pumps, which led to him adding new staff.

Residential contractors such as Smith aren’t the only ones lining their pockets. Ken Misiewicz, CEO, Pleune Service Co., Grand Rapids, Mich., said after a slow start to the year, business has picked up significantly in the summer — in fact, perhaps a little too much.

Misiewicz noted 2013 has been feast or famine. During the winter, he said, 20 of his 60 workers in the construction group didn’t have enough to do. Now, he has so much work he could use 80 workers.

“We want to try to hold on and deliver to our customers, because at this point, we have more work than we can handle,” Misiewicz said. “We expect this trend to continue into at least September. So, we’re really focused on making sure we deliver to our customers through a very, very busy summer, and at the same time, making sure our sales force can find work for fall and winter so we don’t have a repeat performance.”

Pleune’s work at schools does add to it, Misiewicz said, but after talking with some fellow mechanical contractors in the region, he’s noticed the balance between the work loads of contractors is a bit off.

“Some are not only busy, but they’ve been busy longer than we’ve been,” Misiewicz said. “Yet there are others that still don’t have a full plate for summer, and part of it is there are certain contractors who aren’t comfortable doing school work, it’s not their strong suit, so by avoiding schools, they have to look for other projects that will carry them through the summer and into the fall, so there are still contractors that don’t have enough work.”

The Air Conditioning Contractors of America’s (ACCA) Contractor Comfort Index (CCI) reached a score of 77 in both May and June — the highest number in the index’s three-year history, and nine points ahead of June 2012’s 68. A CCI of 50 or above reflects anticipated growth.

“Since launching the CCI, we’ve noticed some consistencies in the index’s trend,” said Kevin Holland, senior vice president, business operations and membership, ACCA. “For one thing, and this is obviously what we expected, there is a definite seasonal aspect to the index’s curve. Going into the summer season, it tends to increase, and going out of it, the index tends to decrease. But, there are other factors that play into how high (or how low) the index goes as well. Primarily, and again this is also to be expected, our index seems to bear close parallels to the ‘other CCI’ — the Consumer Confidence Index. Over the last three months, the consumer index has been jumping up, while the contractor index has been doing the same.”

In addition, the Air-Conditioning, Heating and Refrigeration Institute (AHRI) data of shipments of central a/c and air-source heat pumps, warm air furnaces, residential storage water heaters, and commercial storage water heaters all showed increases when compared to data collected in 2012. Highlights include a 24 percent increase in commercial gas water heaters in February, and a 23 and 33 percent increase in gas warm air furnaces in March and April, respectively.

Heating, Air-conditioning, and Refrigeration Distributors International (HARDI) announced average sales growth for its reporting HVACR distributor members increased 18.9 percent in April, the latest month for which numbers are available. This was after a 6.9 percent decline in March, but gains of 19.4 percent in January and 8.4 percent in February, resulting in a cumulative increase of approximately 40 percent month-by-month thus far for 2013.

“The year has gone mostly as expected,” said Brian Cobble, HARDI president. “It’s been consistent with economic forecasts, but we have seen some improvement in construction activity. The release of pent-up demand is still deferred due to a substantial repair-versus-replace mentality. The weather has been favorable in some regions, but unfavorable in many. Still, I’m cautiously optimistic about the back half of the year.”

Richard Cook, president and CEO, Johnson Supply, Houston, said from his perspective as a distributor, 2013 has been “OK.” He said the company’s backlog is growing, which, combined with the economy, has him somewhat optimistic for the remainder of the year.

“It continues to be somewhat of a puzzling market,” he said. “You’re up for a month or two, but then you’re down. Weather has had some impact on that, but the short story is, we’re up a little bit this year, somewhere in the low single digits, not anything spectacular. We haven’t experienced any outstanding trends, except with commercial equipment, the backlog seems to be improving a little bit. Residential new construction has definitely improved, the consumer business still seems a little bit soft, and consumer sentiment still isn’t quite what it should be from a historical perspective.”

The year has also brought on some interesting legislation that has impacted the HVAC industry. Regional furnace standards were stayed by the courts in May, but there is still a long way to go before that battle is over.

Additionally, the Shaheen-Portman bill, which concerns energy efficiency, has caught the eyes of many in the industry.

“As far as the HVAC and water heating industry is concerned, this Congress has been relatively quiet,” said Guido Zucconi, assistant vice president, congressional affairs, AHRI. “There have been some major bills passed on agricultural policy and immigration policy, but the big energy-efficiency bill, commonly known as Shaheen-Portman, still waits for its turn on the Senate floor. The bill and likely amendments attached to it will have real impacts on the industry, if it is passed. AHRI would like to see a healthy floor debate and discussion on it before the August recess.”

Holland said, anecdotally from ACCA members, one of the possible reasons 2013 has seen an upswing is because a presidential election isn’t causing national uncertainty like it did last year. Now that there is some political stability, homeowners are more willing to move forward with major projects.

“The same thing may be happening again now, with more consumers settling into a sense that the economy, if not improving, is now as ‘normal’ as it may ever be,” Holland said. “But the fact that contracting is so dependent on consumer attitudes should remind us of just how
fragile the contracting economy is — a major disaster, a national security incident, a stock market crash, or any other economic blip that pushes consumer confidence down
will have an immediate impact on contracting businesses.”

Cook said he’s been surprised by R-22 in 2013, calling it his biggest surprise of the year.

“We expected there to be less refrigerant available this year than last year, and in fact, there’s quite a bit more,” Cook said. “It’s led to a rapid softening of R-22 pricing, and I think some distributors, ourselves included, are kind of stuck with some high-priced inventory we bought earlier in the year thinking it was going to be allocated sooner than later. In fact, our supplier did allocate it. We looked at the numbers and thought we wouldn’t have enough to supply our customers, but there’s been plenty of R-22 and the price continues to drop, which has left many quite surprised.”

Smith said not only is he hearing good things from other contractors in his region, but he believes the industry as a whole is on the rise.

“I think the economy is picking up, which has caused the industry to fare well,” he said. “I feel that there is a lot of pent-up demand from homeowners that could not afford service or replacements a few years ago. In my area, we have had three consecutive mild summers. We were certainly due for a hot one and we’re in the midst of it this year.”

Misiewicz, though, is seeing something different. While he often hears news broadcasters boast that the economy is recovering, he feels that recovery is occurring on a macro level. On the ground level, or, in the micro, things are a little bit different, he said.

“When you look at things from the ground, it can mean in the same town, the same area, or the same state, some contractors can have too much work while others are still starving,” Misiewicz said. “I find that to be really fairly dramatic. The big picture may look pretty good, but when you zero in, there’s still a lot of difference occurring between contractors.”

Through it all, though, one word that defines the first half of 2013 is confidence. Many in the industry are slowly starting to show it as more and more consumers are finally willing to open their wallets.

“Contractors that feel more confident about growth are more likely to make investments in their businesses,” Holland said. “Contractors are consumers, too, and they respond to the same prevailing perceptions of economic conditions as their customers.”