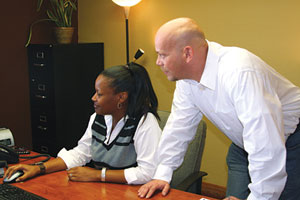 After Rich Morgan found out his company, Magic Touch Mechanical, was named the Residential Contractor of the Year by the Air Conditioning Contractors of America (ACCA), his first move was to call his wife, Michele, the company’s CFO and co-owner.

And arrived they have.

However, looking back, the Morgans’ success nearly didn’t happen, as Rich Morgan said he had no intention of making his Mesa, Ariz.-based Magic Touch anything more than a mom and pop shop.

“My intention was to just run a small shop and eek out enough of a living to support my family,” he said. “But, as fate would have it, along with a little bit of luck and hard work mixed together, we just continued to grow.

“Being in the Phoenix market, which is a very saturated market, it was probably good we didn’t remain mom and pop because there are so many large and professional organizations here. As we went along, my goal was always to be the best. We continue to instill that in our team and I think, as the years have gone by, doing the right thing has earned us very loyal clients and a bunch of referrals.”

Magic Touch did well in its formative years, but it wasn’t until Michele joined the team in 2004 that it really took off, acknowledged Rich Morgan.

Magic Touch has been at the forefront of the Phoenix market for years due to its customer-service approach and its online presence. The company strives to make sure customers are educated on what needs to be done in their homes, and encourages online reviews. They also follow up with customers who opt to receive service from another company.

Over the years, Magic Touch has received numerous industry honors, including being named one of The NEWS’ Best Contractors to Work for in 2008.

“This ACCA honor is voted on by other contractors and industry professionals, and it’s really among the best-of-the-best honors one can receive. It is certainly a wonderful accomplishment,” said Rich Morgan. “We’re really proud of this one and the team is super excited. It’s been a huge morale boost and it’s really been fun so far.

“It feels like an Olympic gold medal. It’s easy to win awards when pitted against lesser competition, but when you’re up against the best and you win, it really is something special.”

Ivey Mechanical, Kosciusko, Miss., will be honored as ACCA’s Commercial Contractor of the Year.

Over the past 66 years, Ivey Mechanical has grown from a small, single-location, primarily residential company, to a multi-location, commercial contracting firm. And while the growth wasn’t without its pains, diversifying their services and expanding across the Southeast region has helped them achieve a new level of success.

The other key factor to their success is their “Ivey Red Book” standard-operating procedures. The manual lays out step-by-step examples of exactly how the company does business. The Red Book has been tweaked over the years, but remains consistent with the framework included in the 25-year-old document’s original draft. This has been an important part of the business’s ability to create a strong regional footprint, as it allows their employees to give each customer the same quality experience, with minor adjustments to cater to the customers’ wants and needs. And to piggyback on the success of the Red Book, Ivey is now producing the “Ivey Blue Book,” which outlines each step of the Ivey service process.

A merit-shop contractor with hundreds of management and field professionals with experience in various types of mechanical construction, the company has successfully completed projects in more than 30 states and boasts an annual volume in excess of $200 million.

“Ivey is honored to be recognized as the ACCA 2013 Commercial Contractor of the Year,” said Keith Paton, vice president of service. “This recognition is not only a testament to Ivey Mechanical Company’s investment in the industry but also an acknowledgement of the many co-workers that strive each day to be ‘People You Can Rely On.’”

Handing Out the Hardware

“Each year many of the best contractors in the industry apply for this award, and share their unique business practices that make them so successful,” said Paul Stalknecht, ACCA president and CEO. “It is always a difficult decision for our panel of judges to choose who they consider the best of the best from the group. This year’s winners are extremely deserving companies that truly exemplify the qualities that all of the best companies in the industry share.”