Contractors know that there are certain customers who may be interested in IAQ accessories due to someone in the family having asthma. Realizing how 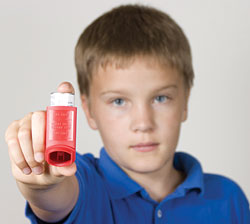 common asthma is can provide food for thought to contractors about whether they bring up the topic often enough with clients.

People diagnosed with asthma in the United States grew by 4.3 million between 2001 and 2009, according to a new Vital Signs report released by the Centers for Disease Control (CDC) and Prevention. In 2009, nearly 1 in 12 Americans were diagnosed with asthma. In addition to increased diagnoses, asthma costs grew from about $53 billion in 2002 to about $56 billion in 2007, about a 6 percent increase. The explanation for the growth in asthma rates is unknown.

According to the CDC study, asthma diagnoses increased among all demographic groups between 2001 and 2009, though a higher percentage of children reported having asthma than adults (9.6 percent compared to 7.7 percent in 2009), Diagnoses were especially high among boys (11.3 percent). The greatest rise in asthma rates was among black children (almost a 50 percent increase) from 2001 through 2009. Seventeen percent of non-Hispanic black children had asthma in 2009, the highest rate among racial/ethnic groups.

The CDC describes asthma as “a lifelong disease that causes wheezing, breathlessness, chest tightness, and coughing, though people with asthma can control symptoms and prevent asthma attacks by avoiding things that can set off an asthma attack, and correctly using prescribed medicine, like inhaled corticosteroids.” The report highlights the benefits of essential asthma education and services that reduce the impact of these triggers, but most often these benefits are not covered by health insurers.

Asthma triggers are usually environmental and can be found at school, work, home, outdoors, and elsewhere and can include tobacco smoke, mold, outdoor air pollution, and infections linked to influenza, cold-like symptoms, and other viruses, said the CDC.