In December 2020, Congress passed the American Innovation and Manufacturing (AIM) Act, which gave the Environmental Protection Agency (EPA) the authority to phase down HFCs to 15% of their baseline levels by 2036. EPA subsequently created a final rule, which was released in September 2021, that establishes the HFC production and consumption baselines from which reductions must be made; codifies the phasedown schedule; and establishes an initial methodology for issuing allowances for 2022 and 2023.

EPA’s final rule also included a ban on non-refillable (also known as disposable or single use) refrigerant cylinders starting in 2025. Several industry associations and a cylinder manufacturer believe this is an overreach on the part of the EPA and have filed petitions asking the U.S. Court of Appeals to overturn the ban.

In calling for the ban on non-refillable refrigerant cylinders, EPA cited the European Union’s (EU’s) HFC phasedown, which required that HFCs be sold in refillable containers. As a result, non-refillable cylinders became a common feature of illegally imported HFCs, and the EU continues to battle a thriving black market in HFCs. EPA wanted to avoid that scenario in the U.S., but many say that the ban is counterproductive. 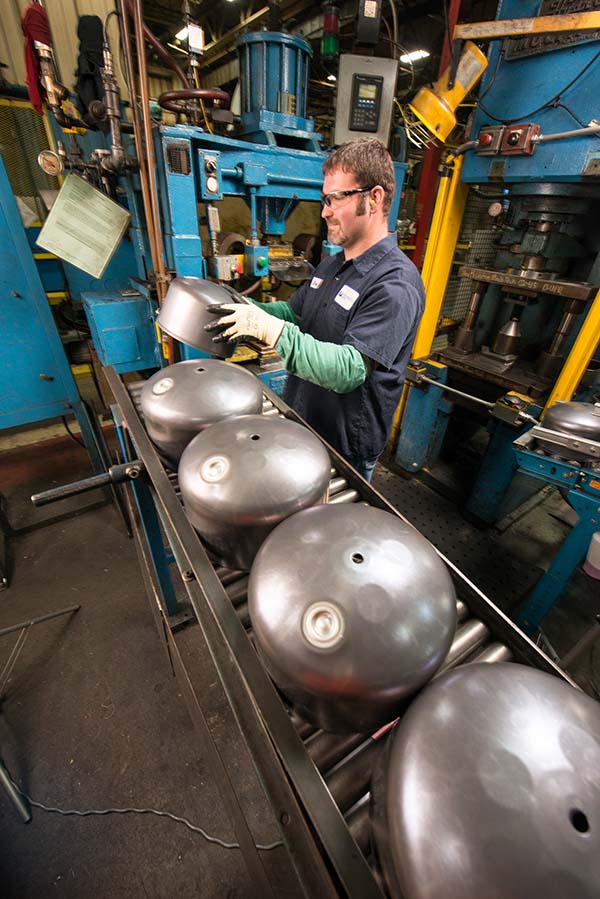 In addition to reducing illegal imports, EPA also expressed concerns in the final rule that while refrigerants can be emitted from both non-refillable and refillable cylinders (due to overfilling, valve defects, cylinder corrosion, human error, etc.), non-refillable cylinders are typically discarded with about 1 pound of refrigerant still in the cylinder. This residual amount of refrigerant is called a “heel”, and it is emitted over time as it leaks out or is expelled when the cylinder is crushed for disposal or metal recycling.

To prevent that from happening, technicians or others could simply recover the refrigerant heel before recycling the cylinders; however, EPA does not believe that occurs for “a number of reasons.” By replacing disposable cylinders with refillable cylinders, EPA estimates that the U.S. would avoid approximately 29,500,000 MTCO2e in emissions between the years 2022 and 2050.

“Today’s standard 30-pound refillable cylinder weighs approximately 21 pounds. Compare that with today’s non-refillable at 5 pounds,” said Powers. “Technicians will be putting much more physical stress on their bodies, increasing the likelihood of injury as they move these heavier cylinders around jobsites and up ladders.”

In addition to health and safety concerns, contractors may need to retrofit their service vehicles in order to find additional space to stack and store filled and empty cylinders. These health, safety, and capital considerations were not examined during the rulemaking period, said Powers, which is why Worthington is asking EPA to re-evaluate these aspects.

Moving to refillable cylinders would also require a new capital-intensive infrastructure, where stakeholders would have to purchase and manage fleets, said Powers. He estimates the HVACR industry would need to invest nearly $2 billion to build a fleet of refillable cylinders capable of displacing the preferred non-refillable containers. In addition, the logistics involved with moving refillable cylinders across the country and back to a filler would be onerous and costly. These include shipping, storing, tracking, cleaning, refurbishing, re-valving, recertifying, and accounting for lost or damaged cylinders.

Also adding to the price are rising material costs and labor shortages being experienced by most manufacturers. Raw material price hikes plagued manufacturing for the first nine months of the pandemic with steel pricing reaching historical highs, which accompanied an extraordinary demand for cylinders. This unexpected increase, which was outside of the typical season, prohibited Worthington from completing its preseason inventory builds.

To compensate, Worthington has taken numerous measures to meet the increased demand. In addition to investing significant capital into a new non-refillable cylinder production line, which will be operational mid-2022, the company has increased hourly wages for workers and instituted employee retention programs.

“However, if this ban stands, the industry would be forced to move to refillable cylinders, and globally, there isn’t enough capacity to meet the U.S. market need by 2025,” said Powers. “We must consider the additional constraint to the supply chain. Even with the influx of foreign-made product, extensive port issues and delays will continue.”

Worthington is not the only one unhappy with EPA’s ban on non-refillable cylinders; industry groups including ACCA, HARDI, and PHCC are also pushing back. These groups, along with Worthington Industries, have filed petitions asking the U.S. Court of Appeals to overturn the ban on single-use cylinders.

EPA’s ban on non-refillable cylinders under the AIM Act is harmful to the HVACR industry, which is why ACCA and its members oppose it, said Chris Czarnecki, government relations manager at ACCA.

“A complete transition to only reusable cylinders is an expensive and logistically taxing prospect,” he said. “It will increase costs for contractors to do business, and those costs will ultimately be passed down to consumers. We feel that EPA has exceeded its authority under the AIM Act in issuing this policy, which is why we have joined HARDI and PHCC in filing a petition seeking to overturn the ban.”

HARDI also believes EPA exceeded its authority granted by the AIM Act in finalizing a rule that will increase costs on the HVACR wholesale distribution and contracting industries and could potentially cause major disruptions that will affect consumers.

“HARDI was disappointed by EPA’s overreach in banning single use cylinders and establishing an overly complicated cylinder tracking system,” said Talbot Gee, CEO of HARDI. “HARDI and the rest of the industry want to work with EPA to successfully phase down the use of HFCs; however, we cannot stand by as the agency exceeds its authority. We believe filing this lawsuit will help to set a boundary that will stop the agency from going too far in the future.”

To address some of EPA’s concerns regarding non-refillable cylinders, Worthington’s petition included an updated, fully recyclable cylinder that remains lightweight, adds safe valve technology to address potential venting issues, and includes visible design modifications that make it easy for Customs and Border Patrol to identify illegal imports. Powers said this is much simpler solution that would save the industry billions in new infrastructure costs.

“Currently, there is not enough capacity from manufacturers around the globe to manufacture the number of refillable cylinders that will be needed to service the U.S. market — four times what we use today — by 2025,” he said. “The unreasonable timeline not only forces a reliance on foreign-made product, but also puts the critical cooling supply chain at risk.”

That said, Worthington supports the AIM Act and its mission to phase down HFCs. As the last remaining American manufacturer of non-refillable cylinders, its proposal to the EPA achieves three important goals. It keeps manufacturing jobs at home in Ohio and Kentucky; it offers an improved, cost-effective, lightweight cylinder for HVACR technicians; and it enables the EPA to protect the environment and safeguard against illegal smuggling, said Andy Rose, president and CEO of Worthington Industries.

“We file this suit reluctantly, as we would much prefer to work together toward a solution,” said Rose. “But the EPA has given us no choice when it assumes authority not granted by Congress, makes policy without objective data and analysis, ignores concerns raised from industry, and refuses to consider alternatives. We urge the EPA to grant our reconsideration petition and undertake rulemaking to overturn the ban and accept our reasonable compromise.”