Types of COVID Transfer and Their Implications for HVAC

Conventional wisdom has it that COVID-19 is transmitted three ways: 1) fomites, where large particles drop onto and contaminate a surface, 2) short-range transmission particles, which gave rise to the 6-foot rule for social distancing, and 3) airborne, as aerosols or droplet nuclei or droplets, which can float around in the air. But despite the grocery-washing paranoia of this spring, it turns out that surface contact isn’t the primary way the disease is spread. And evidence suggests that infections cannot be neatly separated into a neat dichotomy of droplet versus airborne transmissions, said Steve Taylor, principal of Taylor Engineering in Alameda, California.

Taylor is an ASHRAE fellow and was one of the primary authors of the HVAC sections of ASHRAE Standard 90.1, Energy Conservation in New Non-residential Buildings. He spoke at the SMACNA Edge conference, held virtually on Oct. 12-14, about the science behind how HVAC systems impact COVID-19 transmission.

“But as a spoiler alert, the silver bullet that everybody is looking for is masks,” he noted right from the start. “Masks are basically the silver bullet, and they're 100% required to make us be able to inhabit buildings.”

When someone coughs or sneezes, particles of all different sizes are produced: small, large, and anywhere in between.

“The large particles … will fall out of the air in the short distance — that's the 6-foot rule,” Taylor said. “Several researchers have proposed a trichotomy, which is three size ranges [including] medium-sized particles to join the aerosols as short-term and short-range path of transmission.”

What does this all mean for HVAC contractors? It has to do with mitigation.

“Just like Dorothy's house, you get a good wind going and large droplets can be effectively small droplets in terms of how they move,” Taylor said. Those short-range droplets are small enough to remain airborne for many minutes and to be carried by the air currents much further than the large droplets, he said.

In one now-famous case, hair stylists who were infected gave haircuts to 139 people and yet nobody tested positive, despite their close contact. All were wearing masks.

“The droplets were clearly stopped by the masks, but if there were aerosols, they would have escaped and also been drawn in. So it suggests that the aerosol path is not that big.

“Nobody knows the answers for sure,” he continued, “but it appears that short-range droplet transmission is more significant than aerosol transmission.”

With aerosols, it’s good news and bad. The upside is, as demonstrated by the hair stylist case, it doesn’t seem to be the primary mode of infection. The bad news is that it’s pretty hard to stop aerosols altogether. Several mathematical studies have shown that even with aerosol transmission, no amount of ventilation has proven sufficient, he said.

“We simply can't ventilate enough to bring transmission probability down to a reasonable level,” he said.

So far, there isn’t any evidence of long-range transmission — the kind of scenario where somebody on the first floor of an office building coughs, the contaminated air gets into the return system, and somebody on the third floor ends up getting sick as a result. Taylor said that would be “pretty extreme,” because by that time, the viruses would be either extremely diluted or no longer viable. A study by the University of Oregon backs up this theory. It determined that some viral particles did get up into the air handlers from rooms with patients who had COVID-19, as RNA was found in and even beyond the filters in the air handler. However, there were no reports of infections in other areas served by that air handler. 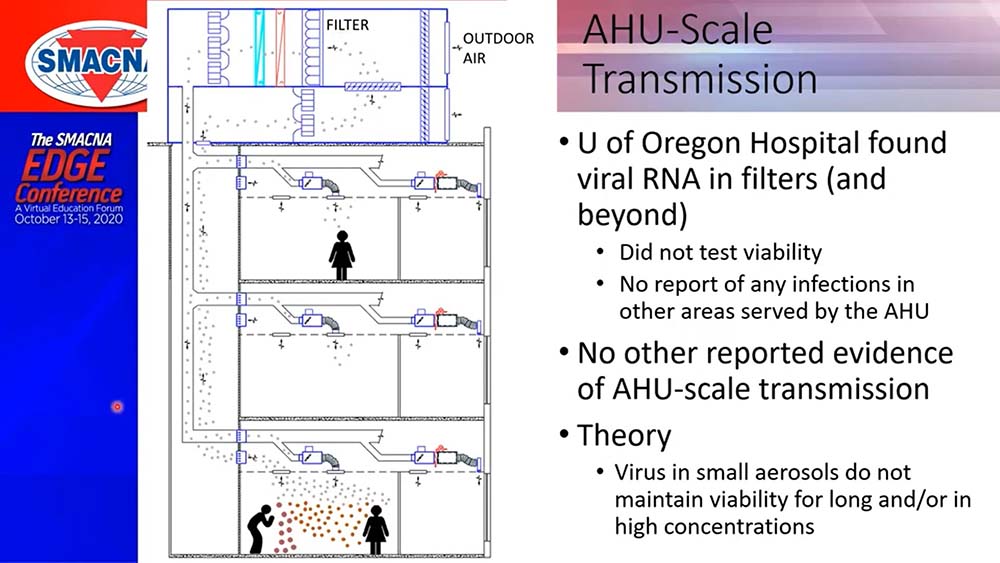 A University of Oregon study shows that even though COVID particles reached the hospital’s air handling unit, no one was infected as a result.

The implication of this, in regard to HVAC, is that “it’s really not clear how much ventilation can help,” Taylor said. “We know ventilation will only help the aerosol path; to dilute the particles, the particles have to be light enough to be removed from the space, and we know that ventilation cannot mitigate the large- and the short-range transfer droplet transmission, because those particles are not removed by ventilation. Therefore, we can never only use ventilation to solve our problem.”

Can You Get to 1% Infection Chance in the Office?

While the probability of getting COVID-19 will never be quite zero, “somebody along the way,” Taylor said, “deemed that 1% is a reasonable amount of probability risk that we should be willing to take.” So, in an average U.S. office building, what would it take to get to that 1% probability?

Taylor used a spreadsheet to compare ventilation versus probability of infection.

“Let’s take a typical dedicated outside air system serving an office building,” he said. “This would use the standard 62.1 minimum, which equates to about .12 cfm/square foot — that's both the people component and the building component added together.”

The calculation gives about an 8.5% chance of infection, assuming that no one was wearing masks.

“Clearly a very high probability of infection that most people would consider unacceptable,” he said.

Multiple variables, of course, can be changed to alter the outcome. With masks, the rate dropped to about 3%. Other factors include whether the building has a VAV (Variable Air Volume) system and uses MERV 13 filters to make sure the recirculated air is clean of viruses.

“If we raised all of the minimums up to the maximum [with a VAV system], we do get to around 1%,” Taylor said. “But this now becomes essentially a constant volume read system, and we would pay a huge premium in energy use to make this happen.”

Swap in dedicated outdoor air for recirculated air and “we’re nowhere close,” Taylor said; simply blowing in outdoor air, with no dilution of the indoor air, is not effective from a disease transmission standpoint. “With masks and a VAV system,” he said, “we’ll get close.” 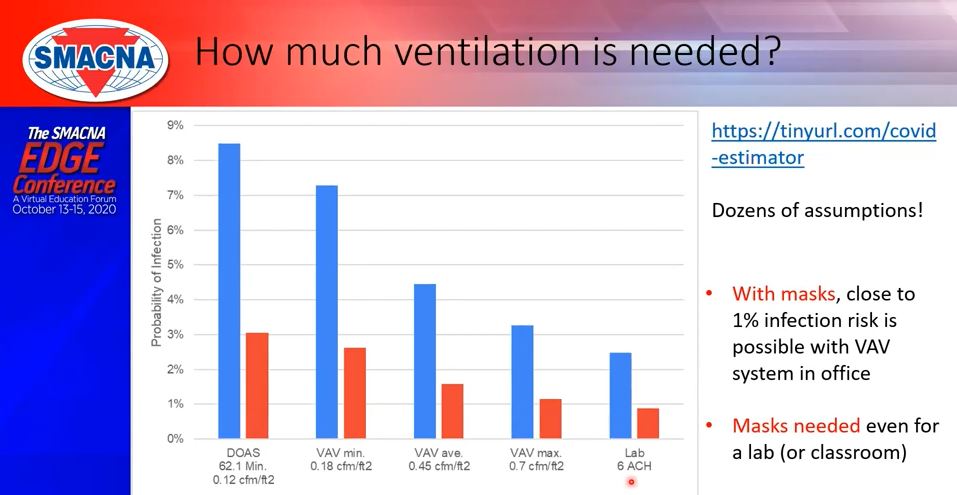 A VAV system plus mask-wearing can reduce the probability of contracting the virus at a typical office building to about 1%.

At the same time, he cautioned that raising the ventilation rate doesn’t lead to a corresponding drop in infection risk.

“So a .7 cfm/square foot is like five times [the average], but we’re not at one-fifth the risk; that’s just the nature of dilution,” he said. “That's only achievable by reducing the exposure time and/or by reducing the quanta emission rates — in other words, wear masks.”

Should the ventilation rate be increased anyway, just to be safe? Taylor said it would lead to a whole host of other issues: lower space humilities, discomfort for occupants, and increased energy use — plus the resulting environmental impact.

For Taylor, that last issue is a real concern.

“We can all argue that, hey, the pandemic is hopefully short-term and we need to do what we need to do, but I get very nervous about short-term becoming long-term,” he said. “When we raise these minimums up and we go to 100% outside air, are we going to go back to something lower next year when we have a vaccine? Or are we going to say, ‘No, let's just leave it that way,’ in an abundance of caution because the next pandemic might come along? It really doesn't help much with transmission of this virus, yet it has a huge energy impact, environmental impact. We have to be very careful about doing things that are ‘just to be safe’ that suddenly become permanent.”