Service Alliance and Roundtable go peer to peer with each other

ORLANDO, Fla. — The 2019 International Roundtable met at the Renaissance Orlando at Sea World on April 16-18 for its Annual Meeting. Service Roundtable members gathered April 17-18 for exclusive sessions, preceded on April 16 by two exclusive keynotes and a workshop for Service Nation Alliance members.

The meetings afforded members the opportunities of the ever-valuable hallway networking, education, and some general fun.

“The most powerful part of the International Roundtable is peer-to-peer networking,” said Matt Michel, president, Service Nation Inc. “A big part of what we do at Service Nation is providing training, education, and mentorship. We are always looking to deliver relevant training to all of our members. For this year’s International Roundtable, we wanted to concentrate on choosing speakers and topics that aligned with four main areas of focus for our members. When business owners can improve operations, lead generation, recruiting, and training, they can make more informed decisions and grow their business the right way.” 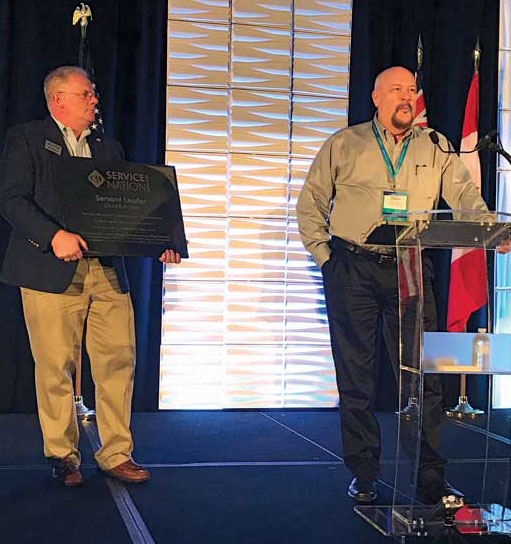 SERVANT LEADER AWARD: David Rothacker, Go Time Success Group, thanks the International Roundtable audience from the podium. Matt Michel, president, Service Nation, Inc. presented Rothacker with the Servant Leader Award. The award recognizes outstanding individuals who lead through service to their industry and the people in their industry. The Servant Leader Award is presented rarely, given in recognition of a lifetime of service to others.

Goodman, Amana, and Daikin sponsored an evening at Discovery Cove, where hundreds of contractors and exhibiting vendors networked and socialized the night away.

Matt Thornhill opened the Alliance session on April 16 with his keynote presentation “Winning the War for Workers,” followed later in the day by Jonathan Fite, who discussed “Business Valuation - Market Perspectives for Your Business,” and David Horsager who keynoted “How Top Leaders and Organizations Drive Business Results through Trust.”

Mike Mullane (astronaut) was the closing keynote. He received a standing ovation for his “Countdown to Teamwork” speech.

Crystal Williams doubled as the emcee for the day, and her day job is as the marketing director for her family’s company in Lufkin, Texas. Since she joined that team, the company has expanded to three locations, with more than 50 employees. Much of the company’s growth began with Williams’ leadership in implementing a strategic company plan that focused on an aggressive advertising campaign of targeted marketing, high community presence, and employee engagement and retention. Williams was the 2018 recipient of the Woman of the Year Award that was presented at Service World Expo.

What is a shark frenzy in the HVAC industry? The term may immediately recall episodes of “Shark Tank,” a 10-year running ABC television series where contestants pitch new product ideas to a panel of celebrity “sharks” who rip their business proposals to shreds as they weigh which ideas are worthy of funding. The HVAC judges were somewhat more compassionate than Mr. Wonderful, the ABC television shark everyone loves to hate, but the concept was the same: Contestants had the opportunity to win $1,000 if their best 45-second pitch for a business idea won over the sharks, an expert panel of residential contractors and consultants who had helped build their own businesses from the ground up.

Robert E. Hall, author of “This Land of Strangers,” spent about 20 minutes setting up his audience with interesting demographic data, indicating a shift in relational behaviors that he contends has a tremendous effect on businesses. From political and religious statistics to trend research on the number of friends one has, the International Roundtable members appeared locked into Hall’s comments.

Underpinnings of disruption and trust within global personal relationships were attributed to a number of factors by Hall, including these two for the audience’s consideration: Eight men have one-half of the world’s wealth, and 50 percent of new business in the U.S. is consolidated in only 20 of the 3,007 counties in the country. According to Hall, relationships are generally more difficult to nurture when such vast differences must be navigated.

Then came the connecting point.

He further contended that the more non-relational we become, the less effective we become in serving our employees and our customers. As people are less satisfied, they become more transient employees and customers.

His clever statistics stole the show.

“People ages 8 to 18 are on devices an average of seven hours and 38 minutes each day,” he said. “We used to have a word for that: job. That’s almost an entire work day!

“What’s happening is that our capacity to deal with the emotions, to deal with the uncontrollable, the unexpected, has gone down,” Hall continued. “And we look to other places to deal with these things, but much less so on a personal interactive nature. It’s difficult to run a business that way, yet these behavioral changes are moving us in different directions.”

Just as the audience’s balloon was seemingly deflated about as far as it could go, Hall pumped some air back into the room.

“We can move from where we are to somewhere else,” he said. “We have had some tremendous advances in societal technologies, so the answer isn’t how do we get rid of it so that people interact more. That’s not going to happen. The answer is to find a way to enable the technology.”

Hall spent much of the remainder of his time discussing methods to create more engagement among all interested parties. He quoted Elena Botelho from his book.

“Look, I’ve got three groups of stakeholders — my shareholders, customers, and employees. If I were to fully satisfy any one of the three, we would be bankrupt. My job is to keep them all constructively dissatisfied in the name of making the enterprise successful so that the enterprise can deliver to them all.”

“Identifying your most valuable and value-creating resources among all your stakeholder relationships is critical to your success,” Hall said. “Any at-risk relationships are your gravest risk or greatest opportunity — that’s one to internalize.”

“Throughout the year, we provide regular opportunities for our Service Nation members to come together and discuss what’s working for them,” said David Heimer, senior vice president of Service Nation Inc. “The International Roundtable gives these members the chance to meet face to face and develop further those business relationships that make them successful.”

Go to serviceroundtable.com for more information.