A Look at Current Trends in Commercial Ductless

Clearing hurdles with better equipment is the order of the day

Conduct some Q&A with professionals in and around the commercial ductless space these days, and the responses as a whole could make one think that Pierre de Coubertin was describing this particular HVAC sector in 2019 with his three-word slogan, not coining the Olympic motto in 1894.

Technology, adoption, accessories … as each one makes a little progress these days, that feeds the other two — which in turn feeds the other, other two. In short, it’s the good kind of busy.

James DeBerry is manager of commercial marketing for Mitsubishi Electric Trane HVAC US (METUS). He reports increased opportunities in large commercial buildings for both ductless and hybrid applications.

“Architects value the design freedom and equipment flexibility that comes with modular ductless equipment and the compact ductwork used in hybrid applications.”

The word “commercial” can cover a wide variety of buildings and situations, but not all of them are good fits for commercial ductless. Of the ones that are, they may align well for different reasons. A now-standard commercial space that has long been used to operate off on its own with inconsistent HVAC quality is the data or network room. 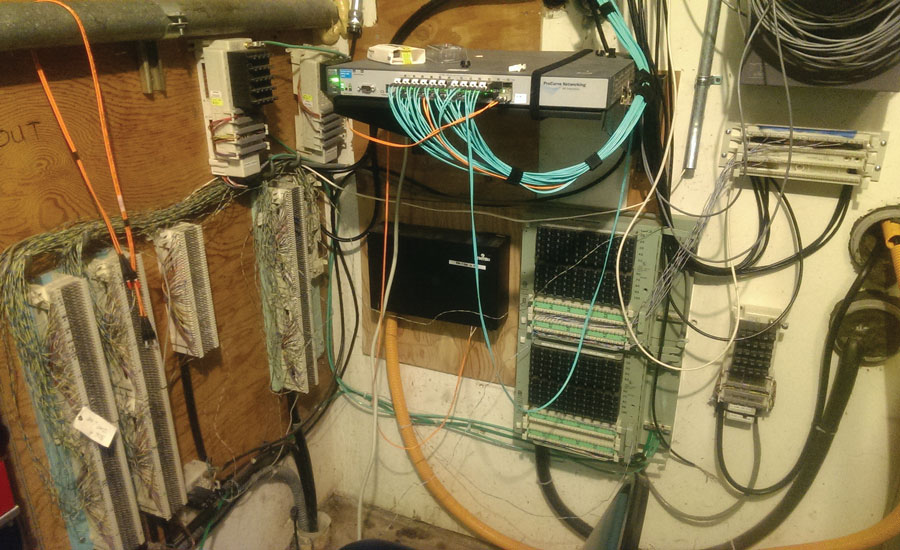 SMALL SPACE, BIG FUNCTION: Not only the zoning capability but also capacities down to 5,000 Btuh have made ductless cooling a natural candidate for computer or wiring rooms of various sizes and complexities. PHOTO COURTESY OF SNOPDOUS [CC0]

“The added option to use a separate smaller system if desired, and still integrate it into the same centralized control system, has increased awareness and adoption in the market,” said Kashinath.

“Data or network rooms are very often underserved, or sometimes not cooled at all,” said Gerry Spanger. Spanger is president of MarketAir, a manufacturer and importer of ductless accessories. He sees ductless’ availability in capacities as low as 5,000 Btuh as furthering ductless’ good fit for these rooms, compounded by the frequent ease of installation.

NOTHING RETRO IN HISTORIC RETROFITS

From its earliest days trying to win a foothold in U.S. commercial applications, a clear upside for the technology was its ability to solve space problems in older building retrofits.

Nortek’s duo attests that nothing has changed on that front, although they point out an overlooked occasional benefit: the technology can allow a historic or preservation building to avoid a drop ceiling altogether, where a generation ago, that might have been an unsightly but unavoidable choice.

Kashinath mentioned that not only is solving the lack of room for ductwork valuable in those cases, but so is minimizing the number of building penetrations and ability to pick the right solution required to install adequate heating and cooling.

Add the ability to incorporate the system into the existing BMS and perceived economy of operation, said Spanger, and what was a natural fit right away has become an even more viable proposition in recent years.

Of course, plenty of existing buildings less than 200 years old have their own issues. Kashinath pointed to this technology’s ability to target and resolve hot and cold spots that commercial buildings (and their occupants) have been living with.

And now more than ever, the hot and cold spots may be in the eye of the beholders. As the Nortek representatives point out, VRF’s ability to provide true zoning can translate to allowing occupants to tailor environments to their own comfort levels in a way that is still unusual for commercial settings.

As for new construction, commercial buildings are more frequently designed for high performance, and that often translates to tighter building envelopes than ever, plus highly efficient systems, DeBerry observed.

While this applies primarily to new construction, DeBerry said, it can also come into play where renovations are extensive enough to rethink the building envelope.

Spanger commented that owners on the front end of the construction process might also take advantage of a literally hidden piece of added value in pursuing ductless from the start.

“The elimination of ductwork usually frees up substantial space in terms of elimination of vertical chases as well as reduced ceiling depths, leading to more rentable space for the owner.”

Kashinath added that the ability to conduct phased installation and providing “multiple points toward LEED compliance” are a couple of other advantages to ductless in new commercial construction without compromising comfort.

UNIT, UNIT ON THE WALL

Despite a host of advantages and increasing popular acceptance, the public’s preconceptions and perceptions of what is visually acceptable still represent an unpredictable area and potential hurdle to overcome for some.

Nortek stated without reservation that “cassettes and ducted units are the most popular, and then wall-mounted for VRF jobs.”

However, Spanger sees the wall mount as becoming “much more common” and more acceptable in general, although he acknowledges those who object to something so visible. That sensibility may be contributing to what several participants see as an uptick in ceiling cassette installations in recessed ceilings.

Moving forward, units may continue to gain acceptance due in part to a much more familiar device paving the way, psychologically speaking.

“We have customers who view wall-mounted units the same way they look at wall-hung televisions,” DeBerry said.

Similarly, he noted that floor-mounted units are more common for retrofits in northern climates, since they can often go right where the radiators were before.

An open-ended inquiry about recent developments in some core areas elicits a range of topics.

“The technology driving this sector is developing exponentially, and we are now seeing units with a SEER of 26, an extremely big jump in efficiency,” said Spanger.

He proceeded to explain that the growing market has drawn increased competition, which “has resulted in a continuous stream of minor improvements, all of which are intended to give the manufacturer a marketing advantage, but which also serve to advance the state of the art for all manufacturers.”

Speaking from personal experience, of course, Spanger also pointed out that this growth has also created a “major and vibrant” support industry for installation components and accessories to improve performance and enhance appearance.

Nortek’s duo mentioned the advent of manufacturers incorporating inverter technology into unitary equipment, as their company is doing.

No longer the upstart niche solution, commercial ductless faces some pressure as a result.

“With increased adoption of VRV in the commercial HVAC market, customers are starting to ask for solutions to address and solve challenges that other technologies are unable to solve,” said Kashinath.

In turn, the industry responds with options like integrating gas heat as backup, improved displays and system health diagnostics, and more as the back-and-forth continues between manufacturers and owners, architects, and engineers.

AND FOR OUR NEXT TRICK …

“As the country continues on the path toward strategic electrification, we anticipate more growth and greater adoption of electric-powered VRF. A majority of commercial applications already use electric systems, and we anticipate that the minority will soon follow suit. You’ll begin seeing more systems that share heat energies from the VRF system to efficiently heat water.”
—James DeBerry
Manager of commercial marketing Mitsubishi Electric Trane HVAC US (METUS)

Discussion of that back-and-forth naturally points to what might be coming down the pike with regard to commercial ductless systems and applications.

Kashinath expects that commercial VRV ductless solutions will continue to grow, with increased adoption in the North American market.

“Future, additional opportunities will focus on more integrated solutions toward simplification of installation and maintenance.”

“A number of manufacturers are offering aftermarket air purification equipment that can be retrofitted to anybody’s equipment,” he said. “One of the manufacturers has even shown a prototype of a ceiling cassette with an integral automatic filter cleaning mechanism.”

“As the country continues on the path toward strategic electrification,” DeBerry said, “we anticipate more growth and greater adoption of electric-powered VRF. A majority of commercial applications already use electric systems, and we anticipate that the minority will soon follow suit.”

DeBerry also predicts that the growing trend away from fossil fuels will affect water heating.

Speaking of water, Clark and McIntyre of Nortek see water-cooled heat recovery as a trend to look for. It offers more stability or protection from temperature extremes, they said — regardless of which type of extreme, apparently, as they cited areas such as Phoenix or Minneapolis.

They also predict that the growth of VRF may slow from its current pace of growth in future years, reminding all involved that the journey in this market sector is more like the Olympic marathon in the big picture.

In the moment, however, “we have huge opportunities to help people engage and realize the benefit” of what the technology has to offer, they said. There may be most of a marathon ahead, but between consumer readiness and the pace of product development, the present for those in commercial ductless seems more like the 100-yard dash.

Maintenance as a Growth Opportunity?

Gerry Spanger is president of MarketAir, a manufacturer and importer of ductless accessories. Much of the contractor and public attention on ductless focuses on its capabilities and installation opportunities. However, Spanger looks at proper ductless maintenance and the precedent abroad, and he sees potential for contractors who are looking to add a revenue stream.

“This is an almost universally overlooked item and is, in my opinion, the new frontier of ductless a/c,” he said. “Ductless units need more attention than just cleaning the filter every month.

“The fact is,” Spanger continued, “they tend to accumulate large amounts of biological material, including mold — on the coil surfaces as well as on the blades of the blower wheel — and these absolutely have to be cleaned off periodically, at least once a year, for three reasons.”

“This constitutes a huge growth area as the market matures and the installed base grows, creating an excellent opportunity for those who are prepared to acquire the necessary equipment and set themselves up as specialist ductless unit cleaners,” Spanger continued. “This is already a well-developed trend in many other countries, particularly in Australia, parts of which have a wet climate with high instances of mold growth. There is now an Australian specialist ductless cleaning company actively selling licenses to employ its proprietary technology in the North American market.”