Its StatePoint technology to be used in Facebook date center

ATLANTA — Nortek is celebrating its 100th birthday this year, but judging by the breadth of activity across its various operations, it’s moving like a company half its age. It is also using some perspective in an effort to position itself to make the most of facility trends.

“A wave of units from the 1990s, or even ’80s, is hitting the end of its life cycles,” observed John McKissack. He’s a product manager for Nortek Air Solutions and, more specifically, for the R7DA combination DOAS/rooftop unit (RTU) that commanded attention at the company’s AHR booth this year.

“It’s common to simply replace, but there’s a lot of potential benefit to upgrading,” he said.

McKissack added that, not surprisingly, there are substantially more capabilities and options now. He also pointed out a less frequently considered factor: Loads for these buildings may even have the same square footage as when the original unit was installed, but their loads have often shifted considerably as owners and spaces have changed.

These trends contributed to the company’s effort in making the R7DA powerful but still configurable. And because mechanical space may not have changed much, if at all, in the years leading up to a new purchase, the R7DA was designed to arrive with a small footprint. Its compatibility with many existing RTU brand curbs can let owners dodge an extra expense by avoiding re-roofing costs for retrofits.

The R7DA, which is available in 6 and 7.5 tons, complements the R7 Platform’s existing R7TQ package space conditioning (only) unit that’s available from 6 to 12.5 tons. The product line will be expanded to 20 tons in 2019. 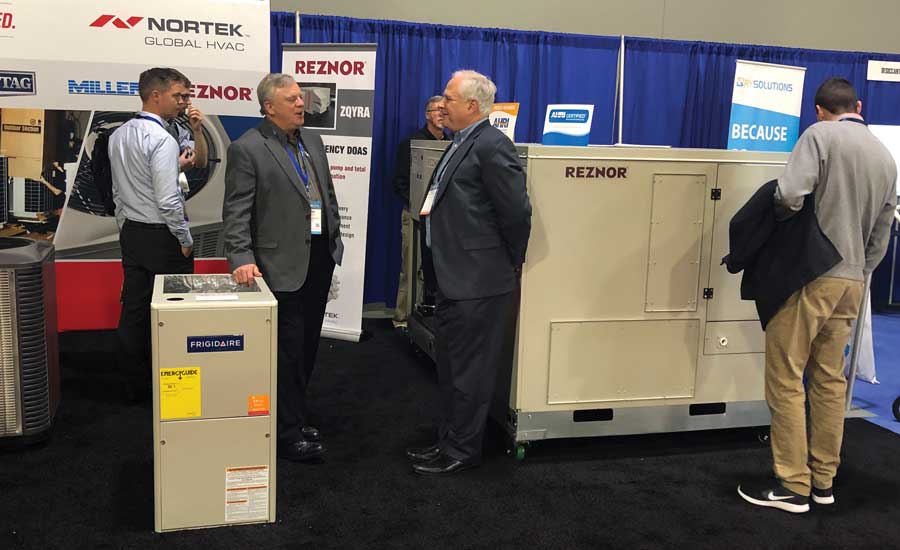 CONVERSATION STARTER: The R7DA combination DOAS and conventional space conditioning RTU under the Reznor brand took the most space and the most attention at this year’s AHR booth.

As for that configurability, its field-convertible design can adapt to existing horizontal or vertical supply air discharge and return air without incurring the design costs of custom equipment. In addition, electrical and gas piping inlets are possible through the curb or unit.

Elsewhere in the Nortek universe, David Street is the vice president of engineering and product management, Nortek Global HVAC.

“Innovation in the residential market is being heavily driven by regulatory compliance,” he said. “In the commercial market, there will be replacement demand in buildings less than 50,000 square feet. Our focus is building products that are energy efficient and easy to install.”

One response that can conceivably fit in any or all of those situations is ductless HVAC. So in addition to the R7DA, this year’s attendees could check out a model from the manufacturer’s recently redesigned split-system jacket line.

Models showcasing two additional new designs (launching in 2019), a model from the company’s unit heater line, and a brand-new 96 percent AFUE gas furnace for use in manufactured housing applications also shared space at the booth.

Happening miles away from the show but nevertheless a proud part of the company’s very recent history: Nortek Air Solutions LLC announced that its StatePoint™ liquid cooling technology was chosen for a new, state-of-the-art Facebook data center. For Facebook, the facility is the first engineered by the company and located in Asia.

The StatePoint system uses a liquid-to-air exchanger in which water evaporates through a membrane separation layer to cool the data center. The liquid-to-air membrane exchanger prevents cross contamination between the water and airstreams. With the addition of a pre-cooling coil, the system can maintain required cooling water and temperatures in humid climates (a box Singapore checks easily) while using minimal supplemental mechanical cooling.

Liquid-cooled data centers seem a long way — geographically and technologically — from the company’s origins a century ago. Founded as the International Oil Heating Co. in 1919, the company rose to success manufacturing coal-to-oil conversion furnace burners. The innovative oil burners helped reduce coal-burning air pollution challenges faced in its St. Louis hometown, which was considered the dirtiest city in the Mississippi Valley at the time.

Later, the company innovated even cleaner gas-fired burner conversions. Decades after that, the family of companies continues working to break new ground, whether by delivering new features on nearby rooftops or serving servers across the world.