Contractors claim the utility is tilting the playing field

Most businesses keep an eye out for ways to diversify their offerings and their revenue streams, but should a public utility?

Thanks to a move by Florida Power & Light into residential service for HVAC, the question is no longer hypothetical in that state, and a group of contractors called the MEP Coalition have joined forces to deliver a firm answer: No.

“Everything owned by the utility, which was derived through a state-sanctioned monopoly, should not be permitted to be used when competing against those of us without such benefits,” said Jaime DiDomenico — he is one of two spokesmen for the MEP Coalition; president of Cool Today in Sarasota, Florida; and director and chairman of Nexstar.

The Florida Refrigeration and Air Conditioning Contractors Association (FRACCA) agrees. Not only has FRACCA joined the MEP Coalition, but it filed a complaint last spring with Florida’s Public Service Commission. FRACCA claimed that FPL should not be able to use an entity named FPL Energy Services to support Jupiter-Tequesta A/C, Plumbing & Electric in a way FRACCA characterizes as unfair. On its website, Jupiter-Tequesta states that it is now “an unregulated subsidiary of FPL Energy Services Inc. and Florida Power & Light.” The contractor serves St. Lucie, Martin, Palm Beach, and Broward counties, listing a 30,000-household customer base.

Before exploring MEP Coalition’s concerns about this relationship further, it should be noted that FPL did not respond to The NEWS’ request to answer several questions regarding the coalition’s allegations for this article.

A large entity using its size and resource muscle to carve out business at the expense of smaller companies may elicit a David-versus-Goliath reaction from many.

Some may perceive it as unfair. However, plenty of actions are unfair without being illegal. It is worth taking a moment to explore one question: Would subsidization of Jupiter-Tequesta or other HVAC contractors actually break any law or rule?

Tray Batcher is unusually positioned to weigh in on this question. Batcher worked as an estimator for a structural contracting company before earning his law degree and joining Cotney Construction Law in Tampa, Florida, where he began in 2012 and now serves as a partner.

Batcher summed it up this way: “The underlying legal principle is that ratepayers cannot be called upon to subsidize non-utility related costs.”

In one particular line of argument, he pointed to Citizens of the State v. Graham, a 2016 case that went to the Florida Supreme Court.

Batcher recalled that in that case, FPL was found to be “acting as an investor, rather than a purchaser, in the natural gas market” in an Oklahoma energy development opportunity. Ultimately, he said, “the Court considered a long-term hedge in a volatile market a capital investment, and not a hedge to stabilize fuel costs.”

That kind of investment, it ruled, was an expenditure that created an inappropriate financial vulnerability for the utility’s ratepayers. Batcher acknowledged that the Jupiter-Tequesta situation is not quite the same, but he maintained that the legal relevance stands up.

“If FPL gambles on and subsidizes multiple MEP service companies, who ultimately bears the risk of loss? This, of course, is the ratepayer,” said Batcher. “As shown in Citizens of the State v. Graham, it does not matter if the subsidization may actually result in a benefit to ratepayers — the subsidization is still improper and illegal to begin with.”

Batcher went on to speculate on potential consequences.

“If left unchecked, FPL’s illegal subsidization of MEP service companies will result in artificially inflated behemoths, capable of vertical manipulation of the supply chain and manipulation of pricing to consumers within the service market,” he said. “This is why we are asking the attorney general to initiate an investigation into FPL’s unlawful and predatory scheme to use regulated utility ratepayer assets to subsidize expansion into new unregulated industries.”

(One other piece of pertinent regulatory history: A 2010 audit by the Public Services Commission did flag FPL for forwarding customer calls on to subsidiaries such as FPL Energy Services, who then pursued business opportunities with those consumers on the call and also offered them other products by companies who paid FPL for the placement opportunity.)

Getting back to current conduct, DiDomenico listed “the buildings, the billing systems, the trucks, the support, and yes, the iconic FPL logo” as assets that FPL should not be able to use to establish a market presence at the expense of other companies. But beyond potential misuse of traditional infrastructure, DiDomenico and the coalition have worked to paint a picture of interference designed to push out smaller contractors.

“They place advertisements for Jupiter-Tequesta in invoices mailed to utility customers,” he said.

Specifically, he cited a promo offering a $25 60-point air conditioner tuneup — $54 off the regular price.

FPL even offers to schedule Jupiter-Tequesta to perform a free inspection for the consumer at any residence when transferring power services, DiDomenico added.

These are things that local contractors can’t do, he argued, much like contractors often cannot offer to break a customer bill for a system service agreement into monthly billing (much less fold it into the customer’s existing electric bill).

This advantage extends to other areas, such as insurance and marketing, according to the MEP Coalition. Its website contains a photograph of a letter that appears to be FPL Energy Services’ documentation of self-insurance as submitted to the Port St. Lucie city government. The average HVAC contractor has to pay for liability coverage and does not have pockets deep enough to self-insure, while FPL Energy Services’ letter seems to attest that it can spare a subsidiary like Jupiter-Tequesta the expense. 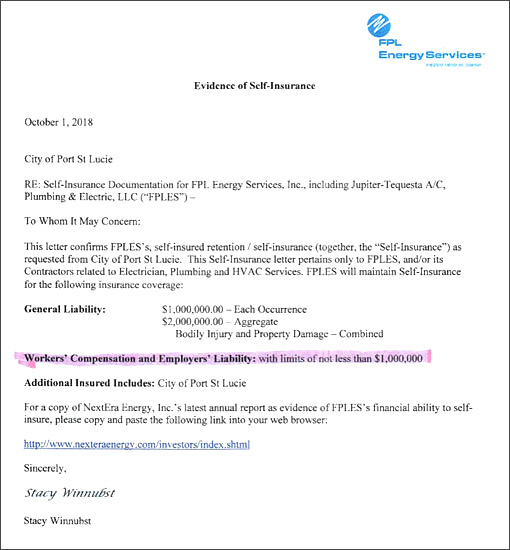 DEEP POCKETS: The average contractor has to pay for liability coverage and does not have the reserves to self-insure, while FPL Energy Services’ letter seems to attest that it can spare a subsidiary like Jupiter-Tequesta the expense.

Finally, there is one audio recording posted among the online documentation for what the MEP Coalition sees as “the case against FPL.”

In what appears to be a recorded voicemail, a man the coalition describes as a paid recruiter calls to pitch what he says is “a great opportunity in the Sarasota area for HVAC technicians that would like to work with FPL.” Not with Jupiter-Tequesta, for instance, or for FPL Energy Services, but with the actual primary utility itself.

In addition to FRACCA, Nexstar, and at least three other local and regional contractors’ associations joining the MEP Coalition, the situation has attracted some interest and support from the north.

ACCA’s Todd Washam, director, industry relations, said that this sort of thing is nothing new for contractors around the country.

He stated that while his organization focuses on national issues and at least primarily leaves state-level issues to state organizations, ACCA stands ready to help with its grassroots action alert system, should it be appropriate.

ACCA Interim President and CEO Barton James recalled similar previous situations, including one in New Jersey and “a long battle in Michigan,” while the MEP Coalition cited an almost identical move by Baltimore Gas & Electric, using an entity called BGE Home. In that case, Baltimore Gas & Electric eventually drove close to one-third of locally owned HVAC contractors out of business, according to the coalition.

James recognizes that just as the utility agendas vary, so does the level of organized contractor political infrastructure from state to state. He is clear that ACCA will mobilize their resources to raise awareness when the time is right, and he hopes that will also attract more contractor members into the organization at the end of the day.

“ACCA has a history of stepping in and righting what the utilities were doing,” James said, “but we want to do that in conjunction with people in the state. We want people to join for the voice but stay for the value.”

The MEP Coalition takes pains to emphasize that it is not against a healthy free market but that it will aggressively defend its right to what it considers a level playing field.

“We are not opposed to competition — just unfair competition by a ratepayer-funded monopoly,” said DiDomenico. “Together, we will fight FPL’s use of their name and logo, public resources, and economies of scale to give them a competitive advantage in this market.”

Whether Florida’s Public Service Commission or its attorney general, Pam Bondi, will interpret some portion of the current dynamic between FPL and Jupiter-Tequesta as a step too far — and whether FPL will have to make a case that this initiative represents no improper encroachment — remains to be seen.