While “smart” tools and tablets are becoming more and more common in an HVAC tech’s toolbox, there are still plenty of things an app just can’t do. Hammering drivers? Cutting wire? How about something as simple as putting in screws?

Even in today’s tech-centric world, hand tools remain essential to performing job site functions every day. While smart tools have their place, and rightly so, the market for hand tools isn’t going anywhere. If anything, it’s growing. Globally, the hand tools market is estimated to increase at a rate of 3.9 percent from 2017 to 2027, being driven in large part by increased demand from skilled professionals in the industrial segment, according to a study published last year by Future Market Insights.

From the time-savers to the space-savers to the new invention that just might save a tech’s shoulder, manufacturers remain invested in advancing the market for HVAC hand tools of the 21st century. Here’s a look at several recently released hand tools designed to make the tightening, loosening, drilling, hammering, and cutting in the HVAC field go faster, easier, and more efficiently.

When Michigan sheet metal worker Ron Aho came back from rotator cuff surgery in 2014, he was having trouble keeping up with the younger guys. But the 28-year industry veteran wasn’t ready to hang up his hammer.

“I was working with a younger journeyman, putting the ductwork up … I was on one side, he was on the other,” Aho said. “We started our drive cleats. Halfway through, my shoulder got fatigued. I stepped off the ladder to rest my shoulder — and John was done, he just kind of smoked me. I told him right there, ‘John, there’s gotta be a tool out there I could invent to make this easier.’”

DRIVEN: Michigan sheet metal worker Ron Aho invented the Cleat Driver Tool, manufactured by Midwest Tool, after 20-plus years of hammering sent him to surgery for an injured rotator cuff.

Just a couple weeks and a few prototypes later, and Aho was ready to give his new device a test run.

“We measured: It took 51 hits with the hammer, and that’s just one duct,” he said. “This drove the cleat up in four seconds.”

Midwest Tool purchased the rights to manufacture and market Aho’s brainchild, the Cleat Driver Tool, in December 2017. The tool attaches to any rotary hammer drill that uses standard slotted drive system (SDS) shafts and has a setting to stop rotation of the drill chucks — the “chisel mode” or “hammer mode,” as it’s typically called. It’s a new way for sheet metal workers to install and remove cleats more efficiently and with less shoulder strain — and it makes easy work of removing cleats that are covered with caulk or duct tape, too.

“A lot of sheet metal workers love it,” said Aho. “It’s twice, three times as fast as putting the regular ductwork up. If you’re doing a remodel, demo work, you can flip the thing upside down, and it takes the drives off, too. It’s fast, it’s easy … you can do a whole corridor in half the time it would take.”

Plus, it eases up on the repetitive motion of swinging a hammer, so workers won’t have to take six months off for shoulder surgery.

“If I could save someone’s shoulder,” Aho said, “that would make my day.”

STICK TO IT: The Magnetic Drift Pin Ratchet Tool from Duro Dyne “sticks” to ductwork while not in use, so it’s always at the ready.

Another tool created to help with duct installation is the 9-inch Magnetic Drift Pin Ratchet Tool from Duro Dyne. Made of cast steel, it allows an installer to easily align two corners in a flange connection. The 9/16-inch reversible ratchet allows for easy tightening and loosening of standard 3/8-inch nuts and bolts commonly used in flange connections. A heavy-duty magnet inside the tool secures it to ductwork while not in use, so it’s always close at hand.

“The Magnetic Drift Pin Ratchet Tool, when debuted at the AHR Expo, was one of Duro Dyne’s most sought after patented products,” said Eric Johannesen, senior national sales manager. “This HVAC-specific tool accomplished many functions for the duct construction expert into one convenient tool.” 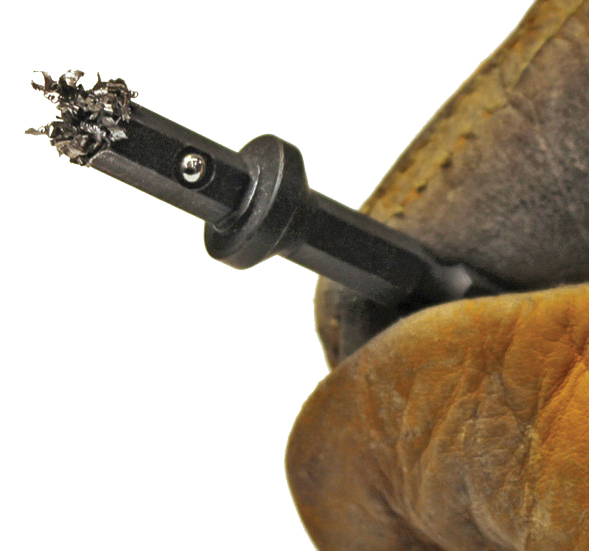 The driver’s two-piece design consists of a dual-sided ¼-inch and 5/16-inch hex socket barrel, and a ¼-inch hex drive shaft with ball detent lock and magnetic tip. The sockets fit over the shaft and lock into place. By reversing the socket, a technician can change hex sizes without disengaging the shaft from the power drill or driver chuck. That’s faster than unscrewing a chuck and putting in a different size piece. The socket also allows easy access for cleaning the magnet-tipped shaft, eliminating buildup of metal shavings in the hex opening to ensure optimum engagement of the hex head fastener.

“While I do carry a small tool pouch, I’ve always carried several hex drivers in the cargo pocket of my pants for an efficient ‘quick draw,’” he said. “To cover most brands, I need a ¼-inch and 5/16-inch driver in both short and 6-inch lengths. A few brands require 3/8-inch or 7/16-inch instead. It’s also helpful to have a Phillips [screw]driver as well,” he said. “Carrying this many drivers in my cargo pocket is uncomfortable … and it can be hard sometimes to reach in and grab the correct driver without grabbing the whole bundle to look at them. The Malco MSHC dual-sided hex chuck driver is very quick and easy to use and has held up great.”

Additional lengths, including a 6-inch version, will be introduced later this year — something Marberry is looking forward to.

“Instead of carrying seven drivers in my pocket and having to pull them all out to find the right one, I will then only need to carry five, and I will easily be able to feel for the right one,” he said. 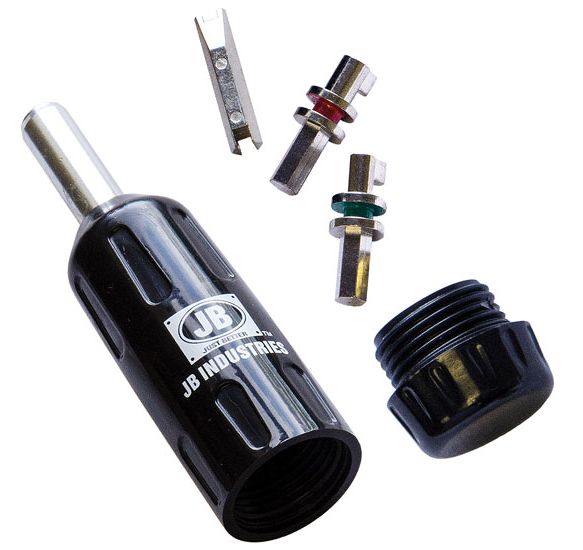 “The unique SHIELD-MULTI tool allows a technician to open any of the three major locking caps that are prevalent in the market,” said Oscar Lopez, vice president of sales, JB Industries. “It saves the technician time, so he can service a unit that is protected by any of the locking caps, and is four tools in one.”

DOWN TO THE WIRE

Southwire updated its EZ-In™ Mini-Split cable offering with connectors and tools they say will make installations of mini-splits quicker and easier. 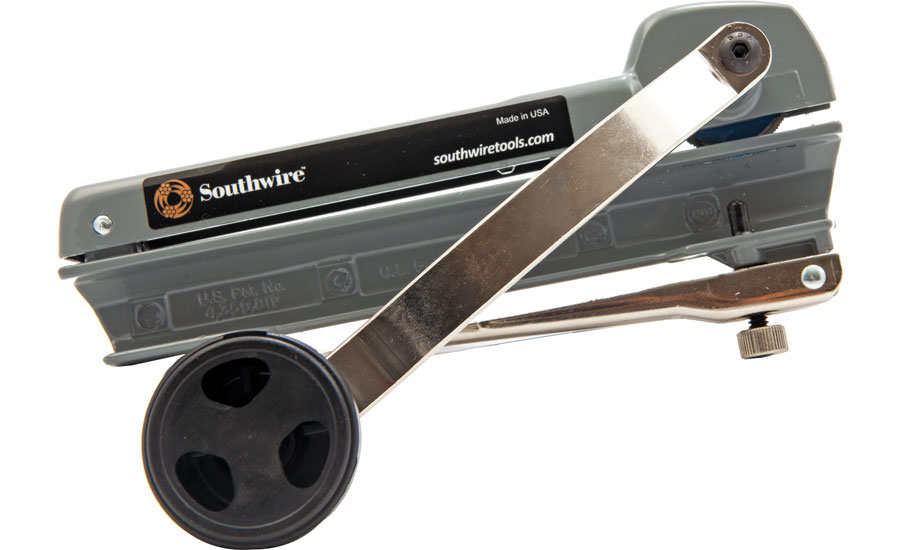 CABLE CUTTER: As part of the company’s mini-split tool offering, Southwire created a rotary cutter to chop through the Ez-In wire.

“We started selling this EZ-In wire with armor in it — an aluminum protective cover — and then put insulation over it,” said Chuck Eddy, vice president, HVAC sales, Southwire. “People liked it because the inspector wouldn’t write it up for not being covered. As the next step … we thought, this is great, but a lot of HVAC guys don’t know how to cut that metal. Electricians do, but HVAC guys generally do not. So now we offer a tool that cuts it.”

EZ-In Mini-Split cable is constructed from stranded bare copper THHN/THWN conductors with PVC insulation and a nylon jacket cabled together with an aluminum interlocking armor. Southwire’s wire-cutting tools include a rotary cutter; a compact jacket cutter/conduit scorer with a reamer blade; and heavy-duty, stainless steel wire strippers to remove the insulation.

“You need to take the rubber off first and use basically a pipe cutter — we call it a scoring tool,” said Eddy. “It takes off the insulation, and then you can cut the metal portion with that rotary cutter. Not only do we provide the wire, but we also offer the right connector and the tools that it takes to, one: score the insulation, two: cut the armor, and three: cut the wires.”

Hand Tools Are in the Bag

Installing and repairing heating and air conditioning equipment requires a lot of tools. As we all know, time is money. So when the efficiency of the work depends on having those tools close at hand, owning the right gear to keep them organized is paramount.

A good tool bag needs to have enough compartments to organize and hold everything technicians need, so they don’t have to carry a second bag, hang things on their belt, or waste billable hours running back to the truck. It needs to be sturdy enough that it won’t fall apart on the job site, putting tools at risk for breakage — not to mention the hassle of carrying everything in and out by hand. And it needs to be comfortable enough to carry around, day after day, for a full day’s work. It’s a specialized accessory. 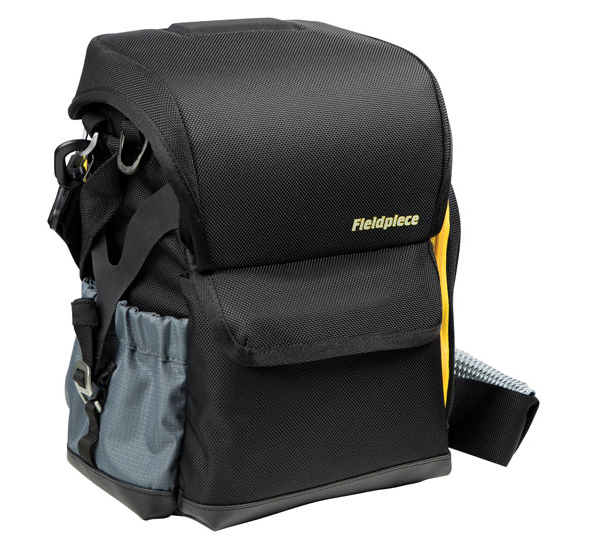 Fieldpiece Instruments recently released the BG36 Inspection Tool Bag, created specifically for HVACR professionals. It’s a messenger-style single-strap design, and the bag’s quick-release pop top combines the easy access of a small open tote with the protection of an enclosed bag. A magnetic tray in the cover provides a spot to hold cabinet screws or washers, and a weather-protected base keeps the bag from tipping over when in use.

“If you liked the original BG44, then the BG36 is something you should definitely check out,” said Daniel Andersen, service division, commercial refrigeration and HVAC, Moore’s Electrical & Mechanical, Charlotte, North Carolina. “The BG36 holds essentially the same tools I had used prior in the BG44, but is a much more compact design. The plastic tray has been replaced with ballistic nylon pockets. I am able to hold all the tools I need for most general HVACR work, and even some tools I don’t use very often. The strap layout has been improved, and the way the bag holds your tools is much more user-friendly.” 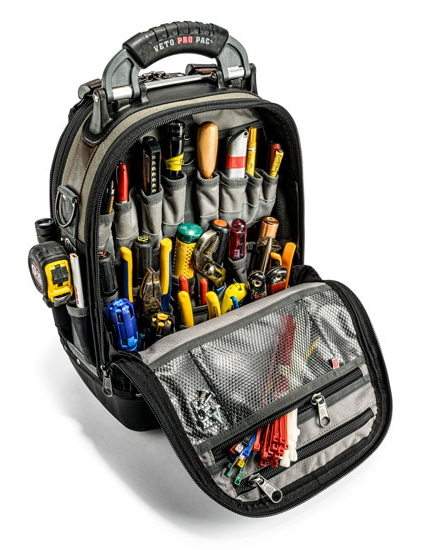 For those who need a hands-free tool bag, Veto Pro Pac has upgraded its popular Tech Pac. It’s a good choice for jobs that involve servicing equipment accessible only by extension or cage ladders or in industrial buildings where there’s a lot of walking involved, according to the company.

“The most difficult assignments for tradesmen are those where you need to climb a ladder or haul tools over long distances,” said Roger Brouard, who designed the bag. “You need to be able to carry all the tools you are going to need safely and comfortably.”

The Tech Pac’s patented center panel design offers dual bays with two tool storage platforms in each bay, and it features a quick-release handle that gives easy access to the compartment. It’s designed not to tip over, and it includes a hook to hang the bag while working.