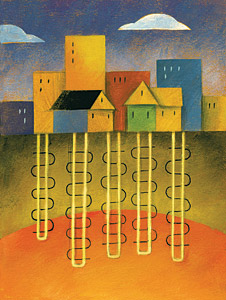 Maryland recently became the first state to recognize geothermal heating and cooling as a renewable energy source. This has many leaders in the geothermal industry hoping this helps serve as a motivator to the other 49 states.

Tom Huntington, president and CEO of WaterFurnace International and chairman of the Geothermal Exchange Organization (GEO), believes the events in Maryland bode well for the future of the HVACR industry.

“This new legislation reflects the state government’s recognition that geothermal heat pump technology can provide as much benefit through power conservation as wind and solar can through clean generation,” he said. “Geothermal systems offer amazing opportunities for governments, utilities, contractors, and homeowners. Anywhere power constraints are a problem, geothermal heat pumps are probably part of the solution.”

First of its Kind

This legislation identifies Maryland as the first state to grant RECs for the thermal loads offset by geothermal heat pumps.

“As of April 2012, the Maryland Energy Administration (MEA) had given clean energy grants to almost 2,400 home and business owners for a total installed capacity of about 9,750 tons of geothermal heating and cooling. The state is off to a decent start with a lot of positive growth,” said Doug Hinrichs, solar and geothermal program manager, MEA.

Doug Dougherty, GEO president, said passage of the legislation is a big win for the industry.

“We applaud the MEA, the Maryland Public Utility Commission, and the Maryland legislature for the collective vision they had in recognizing geothermal heat pumps as a renewable source of energy,” he said. “Over time, we are convinced that utilities will see the importance of geothermal heat pumps in their service areas, because every watt that is saved is a watt earned.”

“Geothermal heat pump systems can take 1 kWh of electricity off the grid, use it to pump 4 kWhs worth of heat out of the ground, and then deliver all 5 kWhs into a building to provide heating,” he said. “With 80 percent of the energy coming from the earth, how could they not be classified as a renewable energy source?”

GEO leaders believe the Maryland decision will generate national exposure. “This legislation is the first of its kind in the U.S. and GEO will use it as a model for the nearly 40 other states that have mandated renewable portfolio standards,” said Dougherty. “Passage of this legislation provides another option for compliance with the state’s renewable energy purchase requirements for public utilities.

“Geothermal heat pumps move three to five times more energy between a building and the ground than they consume while doing so. The energy beneath our feet has value, and geothermal heat pumps can provide that value to utilities and their customers. Maryland has figured it out, and GEO hopes other states follow their lead.”

While many states don’t offer energy credits for renewable energy use, there is a chance the Maryland movement could serve as a motivator for other states considering geothermal incentives.

“It’s possible that other states will expand their definitions of renewable energy sources. Over the last few years many states have beefed up their incentives for geothermal technologies,” said Emily Rogers, director of energy policy, Air Conditioning Contractors of America (ACCA). “Contractors should see an increase in the promotion of the installation of geothermal heating and cooling technology by the utilities.”

“Much has been accomplished, such as the Maryland legislation, but that very success also makes it obvious that we have 49 states yet to go,” he said. “Raising public awareness and effecting policy change is no small task, and it absolutely requires that we have a collective voice.”

According to the U.S. Department of Energy (DOE), homes in the Mid-Atlantic region use 78.5 percent of energy on space heating, air conditioning, and water heating. Under Maryland’s renewable portfolio standard, utilities must generate at least 20 percent of electricity from renewable sources by 2022. Electricity suppliers demonstrate compliance with the renewable portfolio standards by accumulating RECs issued by the state for the renewable power they provide to ratepayers.

“When Maryland home and business owners install geothermal heating and cooling, they are eligible to generate and trade renewable energy credits on the open market,” said Hinrichs. “Renewable energy credits are trading at relatively modest rates right now, but are expected to rise fairly rapidly in value by 2015. By having geothermal heating and cooling in the renewable portfolio standard, geothermal contractors will have another revenue stream to buy down the first costs of going geo.”

Federal 25D provides a tax credit of up to 30 percent of the installed costs of a qualified geothermal heat pump at a homeowner’s primary or secondary residence, through Dec. 31, 2016. The heat pump must meet federal Energy Star criteria, with no maximum credit cap on geothermal heat pumps installed after 2008. Credits may be claimed through income tax return Form 5695.

“Geothermal has the potential to have the greatest benefit for demand taken off the grid; greatest reduction in greenhouse gases; most energy efficient of heating and cooling systems; highest energy cost savings for system owners; shortest payback period of any renewable energy system; and local economic development benefits for the geothermal industry and trades,” said Jack Neil, legislative lobbyist for the Maryland campaign.

“It is anticipated that the greatest economic impact for the local industry will not occur in the short term, but rather the period beginning two to three years after enactment. The growth period would coincide with statutory increases of renewable energy required in the state’s renewable portfolio standard, increasing REC monetized values, and environmental benefits of geothermal exchange systems.”

Maryland’s renewable portfolio standard stipulates that electricity suppliers (utilities and competitive retail suppliers) use renewable sources of energy such as wind, solar, and biomass to generate a minimum portion of their retail sales, in annual percentage increments, to a level of 20 percent by 2022.

Beginning in 2006, electricity suppliers were required to provide 1 percent of retail electricity sales in the state from Tier 1 (Tier 1 resources include solar, wind, qualifying biomass, methane from the anaerobic decomposition of organic materials in a landfill or a wastewater treatment plant, geothermal, ocean, fuel cells powered by methane or biomass, and small hydroelectric plants) renewables and 2.5 percent from Tier 2 (Tier 2 sources include hydroelectric power other than pump-storage generation, and waste-to-energy facilities through Oct. 1, 2011) renewables. The renewables requirement increases gradually, ultimately reaching a level of 20 percent from Tier 1 resources in 2022 and beyond, and 2.5 percent from Tier 2 resources from 2006 through 2018. The Tier 2 requirement sunsets, dropping to 0 percent in 2019 and beyond.