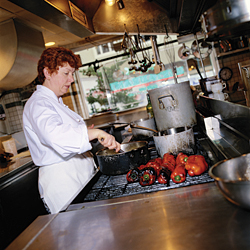 For several years, refrigerant retrofitting has been a common procedure for a lot of the commercial kitchen and restaurant equipment I work on, so I’m going to share some of the things I’ve learned that might help you save some time and money on your own retrofit projects.

Our TXV system retrofits have been fairly straightforward; it’s the capillary tube systems that have been kind of challenging.

With hermetic compressors, you’ll probably have to remove them and turn them upside down so the old oil will drain out. For semi-hermetics, you’ll need to pump the oil out with a hand pump. In either case, carefully measure the oil that you remove, and replace it with the same amount of new oil.

We have several walk-in freezers that were originally R-502. These were retrofitted to R-404A before I came on board, and they’ve been running fine. Some are still using the original R-502 expansion valves, and there haven’t been any capacity or control problems.

We also have a number of 400-pound-capacity R-502 and HP-81 ice machines. Over the years, these have also been refrigerant retrofitting projects, and they’ve been working fine with R-404A.

Retrofitting the old R-12 capillary tube reach-in units to use R-134a has been more difficult. R-12 is too expensive to be cost effective these days, so we’ve been changing these old R-12 units over to R-134a.

We tried charging a couple of old R-12 units with R-134a without changing the cap tubes, just to see if it would work. It doesn’t work; so if you’re changing over an old R-12 unit to R-134a, plan to change the capillary tube too.

We had a series of changeovers where we used the recommended cap tube size and ended up with starving evaporators, high superheat, high subcooling, and poor cooling capacity. Now, no matter what size cap tube the chart recommends, we just use #4 cap tube, first cut to 75 percent of the length recommended by the chart.

When changing out a capillary tube during a refrigerant retrofitting project, it’s a good idea to remove the evaporator, or at least remove the mounting screws so you can move it enough to have good access to the inlet line where the cap tube is brazed in.

Sweat the old cap tube out carefully, then use nitrogen to blow the old mineral oil out of the evaporator, condenser, and lines. After that, braze everything back together normally with the new cap tube installed, and be sure to install a new drier.

When it’s time to charge and run the unit, we charge to 5˚F subcooling if possible, keeping a close eye on suction pressure and the compressor amp draw. If our saturated suction temperature is within 10˚ of what we want to see, which would be 25˚ for a medium temp unit, or -10˚ for a freezer, and if superheat at the compressor is no more than 70˚ (it’s always high at this point), we let the unit run until the box is within 5˚ of set point.

Once we’re at the point of a re-frigerant retrofitting project where the box has pulled down to within 5˚ of set point, we look for the saturated suction temperature to be in the range of 20˚ to 30˚ for a medium temp unit, or -15˚ to -5˚ for a freezer, with 20˚ to 30˚ of superheat at the compressor (since we don’t solder the cap tube to the suction line), 5˚ to 15˚ of subcooling,and a normal compressor amp draw.

If necessary, we’ll add or remove refrigerant; and if we can’t bring our pressures and temperatures to within 2˚ of these conditions all the way around, we’ll cut or lengthen the cap tube to get the correct readings. Up to now, we’ve had to cut the cap tube shorter, and haven’t had to lengthen it yet, but it could happen.

I don’t have an explanation about why we have problems with the cap tube charts, but this method has worked well for us, and the units run fine when we’re done.

The units we’re working on are all 15-year-old Taulsen, Delfield, True, and Hobart units, and if we can get a few more years of relatively trouble-free use out of them after these refrigerant retrofitting projects, it’s worth a little extra effort.

Mike Taitano is a technician with 20 years of experience troubleshooting, repairing, and maintaining air conditioning and refrigeration equipment. He also operates Air-Conditioning-and-Refrigeration-Guide.com. For more information, visit www.air-conditioning-and-refrigeration-guide.com.
You must login or register in order to post a comment.