Kevin Ryan, the president of Sheet Metal Werks in Arlington Heights, Illinois, knew his company's recent project was eye-catching, but he had no idea it would generate so much buzz on LinkedIn. However, the pure copper spiral duct plus fittings, created for IT Gym, caused a stir online, generating close to 500,000 views and lots of interest in the full-service fabrication shop.

"I've got two jobs I'm looking at in Florida, one job in Texas, and a job in New Jersey because they want copper," Ryan says.

It's the first time in 35 years that Sheet Metal Werks has built duct and fittings made entirely of copper. The work is in the Bell Works Building, which is being converted into restaurants, workspaces, and businesses. IT Gym is just one of the places set to open in that space.

"It's stunning," Ryan says of the project. "I went out there to shoot the video at the job site, and it took me — something that should have taken the minute and a half or however long the video is — it took me probably almost an hour because people kept coming in (to see) this particular job. It's a very interesting job."

The project was simple — forming and fabricating easier than an aluminum job. The installation was much like a regular steel job and did not present any challenges for the crew. However, over time the copper duct will patina. "It will start to age. The process may take a while because it's all indoors versus if it was sitting outdoors on a roof or being exposed to the weather between the constant sun and the rain and the sleet and snow," he says. "But I believe and I'm not 100% certain that they're going to coat this after construction and try to preserve that sheen and look to it after all the construction is done."

With this project behind them, Sheet Metal Werks is ready to take on the next pure copper project. 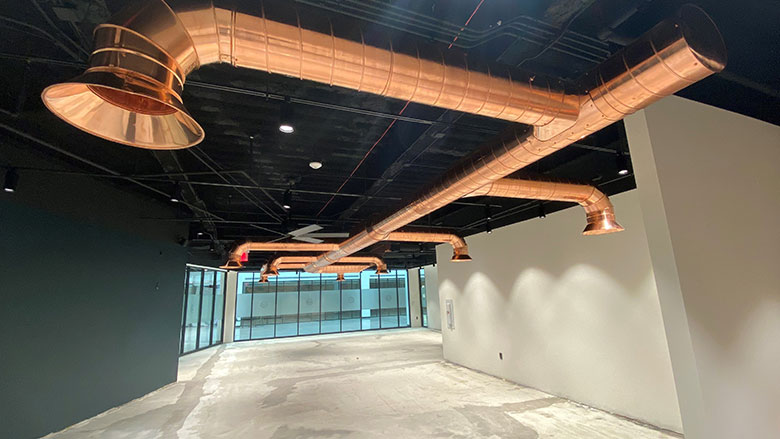 Stacey Winconek is an award-winning journalist whose work has appeared in Metro Parent, Chicago Parent and Oakland University Magazine. She writes engaging and informative pieces — and she has a passion for exploring new topics. Motherhood is her favorite gig. When she’s not writing, she’s chasing around her preschooler. She likes coffee, cats, kayaking with her husband, and spending time with family and friends (in non-COVID times, of course).