When it comes to reducing duct leakage, improving airflow, aesthetics and ease of installation, round duct is superior.

High performance is a current buzzword in the HVAC construction industry. With energy costs a continual concern, designers and specifiers are searching for ways to maximize energy efficiency in buildings.

The search naturally leads to consideration of HVAC systems, which account for around 40 percent of the energy usage in a typical building. Besides reducing costs, boosting the energy efficiency of HVAC systems helps building owners and operators meet the latest sustainability requirements such as those spelled out in the U.S. Green Building Council’s Leadership in Energy and Environmental Design program  or the American Society of Heating, Refrigerating and Air-Conditioning Engineers’ standard No. 90.1.

Of course, one way to meet sustainability objectives is to specify more efficient, green HVAC equipment. So when designing an HVAC system, engineers often focus on the more costly mechanical components such as chillers and air handlers. But there’s another part of the system that has a major impact on performance and efficiency: the ductwork. That’s why many of today’s smart HVAC system designers and specifiers are carefully considering their ductwork options.

One choice that has much to offer in both new construction and renovation of commercial buildings is spiral ductwork. Advantages of spiral duct include efficient air movement and minimal leakage, which can help reduce the energy needs of HVAC systems. Spiral duct is also relatively inexpensive to install and provides an aesthetic asset once in place. Many of these benefits can be realized further with the use of self-sealing connections such as Complete Seal, or flanged connections such as E-Z Flange.

In buildings, spiral ductwork can be a major asset to an HVAC system, which requires power to drive the fan or blower unit that moves air through the ductwork to various locations in the building. If the system fails to deliver the proper airflow, building occupants will turn temperature settings up or down more than should be necessary to meet their comfort needs, which in turn boosts energy use and costs.

Such problems can be lessened by using spiral duct, which produces equal internal pressure and allows even and efficient airflow. Studies have shown that round duct produces less airflow resistance than rectangular duct, which lowers energy use. With the seam entirely on the outside of the duct, spiral duct also has a smooth interior that minimizes friction losses.

Another key airflow issue concerns pressure. Air leaving an air handler under high pressure drops to lower pressures as it travels through straight ducts, bends and diffusers to its destination. In typical spiral duct systems, this pressure drop is less than the one experienced by air flowing through rectangular ductwork. By decreasing the drop in air pressure and increasing airflow efficiency, spiral duct allows the use of smaller, less powerful and less expensive air-moving units.

In addition to airflow, duct leakage is a major concern of building designers and owners. When ducts leak, HVAC systems require larger and more expensive fans to produce the required airflow. Duct leaks also make fans and other HVAC equipment work harder to maintain the desired building temperatures, increasing energy usage and reducing system efficiency. Often, engineers will specify HVAC construction systems with larger and more expensive fans to produce the required airflow, simply to compensate for duct leakage. An inefficient duct system can be easy to see; if it’s not sealed properly, blowback will build up outside of the ductwork, which is both inefficient and unsightly. Other undesirable effects of duct leakage include lower indoor air quality and reduced comfort for building occupants.

Besides its performance-related features, spiral ductwork offers other advantages that make it a good choice for HVAC systems. Consider, for example, the positive impact it can have on the installation process. Strong and rigid due to its lock-seam construction, spiral duct needs fewer supporting components such as stiffeners and hangers, cutting both product and labor costs. Spiral duct also requires fewer tools to install — just a drill and some screws. In comparison, rectangular duct requires slips and drives, corners, cleats, nuts and bolts, gasket, hammers, snips, as well as field cuts and caulk.

The strength of spiral duct also allows it to be made of lighter-gauge, less costly metals than would otherwise be required. As a result, spiral duct can be significantly lighter than rectangular duct, making installation easier — so much easier, in fact, that sometimes it can be installed by just one person rather than two.

In addition, spiral duct normally comes in 10-foot lengths as opposed to 5-foot lengths for rectangular duct, reducing the number of connections needed by half to create a duct system and thereby reducing installation time, labor and equipment. Further savings in all these areas can be realized by users of Complete Seal or E-Z Flange connection systems. 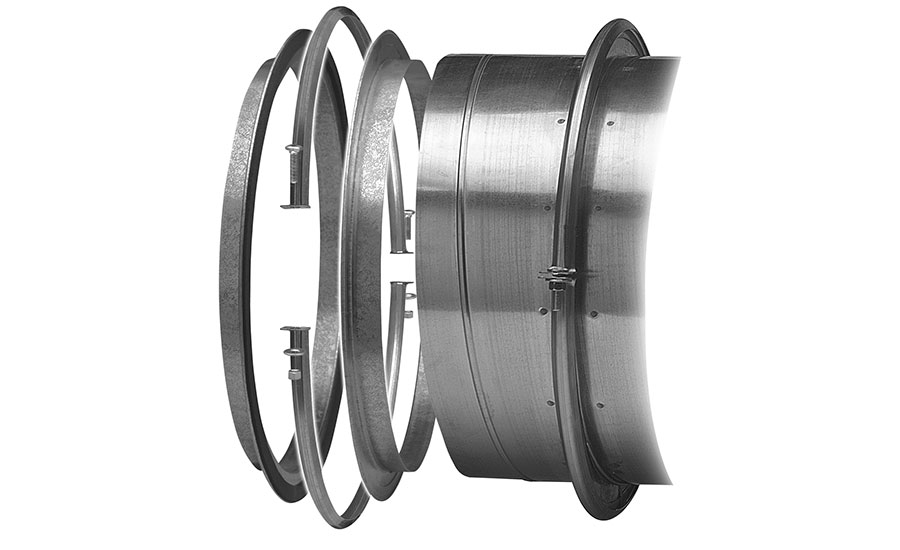 The lack of messy caulked slip-fit connections also contributes to the aesthetic appeal of spiral ductwork with gaskets or flanges. When these systems are used, all sealing is internal, so duct seams are smooth and clean. This enhances the attractiveness of exposed spiral duct, which is in favor with designers and architects as it gives buildings a contemporary look.

Today, spiral ductwork is frequently found in modern commercial buildings with open-air designs. These include restaurants, sports facilities, malls, stores and warehouses. In addition, spiral duct is often the choice for public and institutional buildings such as churches, community centers, hospitals and schools.

Over the last half century, spiral ductwork has taken a commanding market-share lead in Western Europe, which has long been saddled with relatively high energy costs. Though not nearly as common in the U.S., spiral duct is consistently gaining popularity among designers and specifiers struggling to keep up with the latest trends and requirements complicating the job of building construction. Current conditions have increased the need for innovative, high-performance HVAC systems that reduce energy use and costs. Spiral ductwork can give users a significant performance, installation and aesthetic edge.

This article and its images were supplied by Sheet Metal Connectors.