The Changing Landscape of Refrigerants: Knowing the Facts

As we like to say, change is good. Right? Across Canada, we’re getting closer to a major change for our industry – switching out R-410A in new HVAC equipment, for lower GWP refrigerants. For those who have made decarbonization and sustainability commitments to their stakeholders, this is, in fact, a welcome change. Many others are taking a wait-n-see approach, trying to determine how to contribute to sustainability while making the change the least disruptive to customers and business operations. While change is imminent – regulations will likely take effect by 2025 across Canada – gathering the facts about the new refrigerants will help you make the most informed decision.

The 2015 Paris Agreement is the international treaty to limit global warming to a 2°C rise in temperature. Canada was among the first countries to sign and ratify the agreement, setting our own goal to reduce greenhouse gas emissions 30% by 2030, from 2005 levels.

The choice of refrigerants has a strong role in making that possible: stationary air conditioning contributes nearly 20% of electrical consumption of buildings today, and the use of air conditioning around the world is projected to triple by 2050.i If we continue developing the world without controls, temperatures are forecasted to rise up to 0.6°C directly from HFC emissions. The good news: research shows that making the right refrigerant choices has the potential to limit the temperature rise due to HFC emissions to 0.06°C. That’s six one-hundredths of a degree.ii And that gives us all a great reason to strive for reducing emissions from AC/HP system by using lower GWP HFCs and improving system efficiencies.

Refrigerants are categorized based on toxicity and flammability and assigned respective refrigerant concentration limits by ASHRAE® Standard 34. This is an alphanumeric system, where letters A and B denote lower toxicity and higher toxicity respectively, and the numeral 1 denotes no flame propagation, 2L denotes lower flammability, 2 denotes flammable and 3 denotes higher flammability. 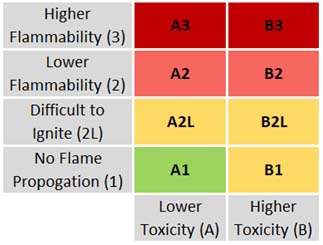 In 2020, ASHRAE created the 2L sub-classification to distinguish them from Class 2 refrigerants because they are difficult to ignite and burn very slowly. This is important for contractors because products using A2Ls are just beginning to be offered in limited areas, as and when building codes adopt them, province by province and state by state. As of this writing, A2L units are only available in Canada as exemptions to regulations, and only in small sizes such as PTACs or residential window units. In the US, they are available in Oregon, Washington State, North Carolina and Florida. Even if they’re not yet available in your area, now is the time to learn about them and prepare for their potential adoption and availability.

Fact: GWP is an Inaccurate Measure of Total GHG Emissions

Because most power in Canada is from renewable sources – hydro, solar, wind, nuclear – by growing solar and wind, burning of fossil fuels tends to be supplemental, making indirect emissions a less significant contributor. But besides compliance to Canadian legislation, securing incentives and system efficiency still matters for continuing on the path to effectively reduce GHG emissions given two conditions: the growing demands for AC/HP and the current limitations of power plants using renewable energy sources. Additionally, indirect emissions will also become a major factor when more and more Canadians transition from gas and oil furnaces to HP systems.

When choosing an R-410A replacement, make sure to consider total emissions in your decision.

Fact: R-32 Can Beat the Efficiency and Capacity of R-410A

A refrigerant’s inherent thermodynamic properties as well as its composition contribute to drive both system efficiency and capacity. In comparing the leading contenders to replace R-410A, single-component R-32 outperforms R-410A and its potential replacements on both attributes. Daikin Applied’s research shows that R-32 is up to 12% more efficient than R-410A. Plus, an R-32 system could potentially have up to 40% less charge than a similar R-410A system, meaning you could reduce the amount of refrigerant in the system and potentially also reduce the amount of refrigerant leaking to the environment.

Because R-32 has excellent thermodynamic characteristics – e.g., it can accomplish the same heat transfer with less refrigerant – it’s used as the base for many blends, including R-410A.

Importantly, because R-32 is a single component refrigerant, its composition doesn’t change over time as it does with most blended refrigerants. This means there are no negative performance impacts on the system due to composition change.

Fact: Ease of Use, Price and Availability will Continue to Strongly Factor into Contractor and Customer Purchase Decisions

It’s unlikely that many customers today are hand-picking a refrigerant. And even as sustainability becomes more prominent in their purchase decision, the standard needs will continue to rule the day: ease of use, price and availability.

When it comes to ease of use, single component refrigerants offer many benefits over blends. They can be topped off and recharged in the field, in both liquid and gas phases, without changes in composition. They can be cleaned and reused on-site. Plus, they’re easy to reclaim and recycle off-site with a simple cleaning process, particularly as compared to blends with HFOs (hydrofluoroolefins) that are typically reclaimed by being distilled to their pure compounds and then remixed. The ease in recycling offers another environmental benefit that no blend can offer.

Price and availability are frankly hard to evaluate for the newer blends, R-454B and R-466A. Both are proprietary chemicals, patented by OEMs, and neither has been commercialized, to date. Being proprietary to the companies that own the patents has the potential to limit access and supply.

We do know that R-32 refrigerant historically has a lower price per pound than R-410A, and a much lower price per pound than most accessible proprietary low GWP blends. We also know it’s widely available, as it’s used by more than 50 manufacturers worldwide in a range of systems including residential splits, VRF, scroll chillers, rooftops, and window units. As a commodity that is also the foundation of many refrigerants, R-32 is manufactured by numerous producers and distributed globally. Thus, it’s widespread availability is a benefit.

How will the Industry Keep Up?

The HVAC industry has many headwinds as we face this transition, not to mention sensitive customers who just went through the last transition from R-22 to R-410A. It will require curiosity, patience and resilience from all stakeholders. But one thing most OEMs agree on: we need to act now and over the next several decades to reduce our collective impact on the environment. The American Innovation and Manufacturing (AIM) act, which mandates HFC regulation in the United States, received support from many leading manufacturers. Canada is a few steps ahead, beginning our HFC phase down in 2019, with further reductions coming in 2024, 2029, and 2034, to achieve the total 85% reduction in HFC consumption by 2036.i

While the initial reduction might not be hard to achieve, the 2024 reduction may require more stamina to get to that next step, with regulations that limit the use of HFCs in certain applications. Contractors and technicians can get prepared today with the resources and training programsii that arm them with the facts to make the right replacement choices and install and service new systems.

Colin Berry is a District Manager for Daikin Applied Canada. He has 20+ years’ experience in the HVAC field with a specialty in energy management. He has presented to countless engineering consultants and industry groups on how to position themselves to embrace future energy requirements. He is currently leading a team who are focused on identifying and rectifying operational and energy systems issues with both small and large end-users. He is a Certified Energy Manager (CEM) and active member of the Association of Energy Engineers and the local Canada East chapter.

v HRAI in Canada has partnered with Esco to adapt US training to Canadian standards. See the links below:

This article previously ran in the March 11, 2022 issue of AEE Canada East:
The Changing Landscape of Refrigerants: Knowing the Facts – AEE Canada East