This website requires certain cookies to work and uses other cookies to help you have the best experience. By visiting this website, certain cookies have already been set, which you may delete and block. By closing this message or continuing to use our site, you agree to the use of cookies. Visit our updated privacy and cookie policy to learn more.
Home » SPONSORED BY R-32
Sponsored By
R-32
HVAC Residential MarketHVAC Light Commercial MarketHVAC Commercial MarketRefrigerationRefrigerants Hydrofluorocarbons (HFCs), as the name suggests, are compounds containing hydrogen, fluorine, and carbon. They are used for residential and commercial heating, ventilation, and air conditioning (HVAC) as refrigerants, by firefighters as a fire suppressant, and in aerosols as propellants.

HFCs are also greenhouse gases often described in terms of their Global Warming Potential (GWP), which is the tendency of a substance to persist in the environment while absorbing energy and, thus, retain higher energy and temperatures in the atmosphere. GWP ratings for substances and material that contribute to the potential of global warming are developed by the Intergovernmental Panel on Climate Change (IPCC), a United Nations body responsible for assessing the science related to climate change.1 GWP uses the same scale to evaluate all substances and materials, making comparisons of direct emissions of refrigerants easy.

For example, R-410A—a commonly used HFC refrigerant over the past two decades—has GWP of 2088, which suggests that each kilogram of R-410A emitted to the atmosphere is equivalent to 2088 kilograms of CO2 emissions. Different refrigerants have different GWPs:

R-32, or difluoromethane (CH2F2), is an HFC refrigerant with a GWP of 675, which is markedly lower than that of R-410A and many other commonly used refrigerants.

R-32’s properties can help HVAC engineers design systems that have a lower greenhouse-gas-emissions impact than R-410A. R-32 has greater latent heat capacity than R-410A, which means that R-32 systems could be designed to achieve the same capacity performance by circulating less refrigerant at a lower flow rate through the compressor. And a lower charge of R-32 refrigerant in comparison to R-410A allows HVAC engineers the opportunity to design smaller compressors and coils. These characteristics of R-32 help give engineers the tools they need to design R-32 systems with energy savings and a reduction in the material used. And these indirect benefits can have a significant impact on the environment that are not accounted for in a GWP rating alone.

A number of recent LCCP studies3, 4, 5, 6, 7 have found that CO2 emissions due to electrical energy consumption is a significant contributor to an HVAC system's lifetime-emissions calculation. Amongst other considerations related to manufacturing, materials, and related process, LCCP analysis takes into account emissions generated by the power plant supplying the electricity subsequently used by the HVAC equipment during that equipment’s useful lifetime. A large portion of the total lifetime emissions of an HVAC system is due to the system’s electricity consumption. According to these LCCP calculations, electricity consumption can contribute up to 85% of the total emissions over a system’s lifetime. As a result, a refrigerant that achieves higher energy efficiency in use could be more effective in protecting the climate than its GWP rating suggests. The total electricity consumption of an air conditioner or heat pump depends on a number of factors, including the regional climate, surrounding infrastructure and the system’s cooling capacity and energy efficiency. Since the location, infrastructure, and cooling capacity are the same for a given application, the differentiating factor between systems is typically system efficiency. More efficient systems consume less electricity. Hence, a small change in efficiency can make a significant reduction in environmental impact over the system’s lifetime. R-32 refrigerant allows engineers to design systems that can reduce environmental impact.

Due to R-32’s excellent thermodynamic properties, R-32 systems can be designed and engineered to be up to 12% more efficient when compared to similar R-410A systems. And R-32 systems can be designed to achieve performance improvements over a broad range of operating conditions. Daikin lab tests on rooftop systems equipped with inverter-driven compressors and water-cooled chillers found that full-load and part-load efficiency rating metrics improved by up to 12% by using R-32 as compared to R-410A. Daikin engineers have also found that R-32 can be used in heat pump and cooling applications and extreme cold and hot climates with improved performance over R-410A.

According to the EIA projections, 94% of the required energy for operating air conditioning systems was provided using electricity from non-renewable sources. Renewable sources are still not widely implemented, and according to the EIA’s projections, by 2050, the United States will consume 500 trillion BTUs more electricity.8 Reducing energy consumption, even by small percentages, can result in considerable accumulated energy savings. Improving energy efficiency of residential and commercial air conditioning equipment by using R-32 can result in significant benefits in the coming years.

R-32 systems can be developed that are more efficient and provide higher capacity with less refrigerant charge, leading to a smaller physical design compared to R-410A systems. Also, R-32 systems allow for designs that use less raw material—e.g., less steel, copper, plastics, and aluminum—during the manufacturing process. That, too, helps to reduce the system's potential environmental impact. Additionally, R-32 systems can offer a smaller refrigerant carbon footprint than blended refrigerants. Because R-32 is a single-component refrigerant, it offers simple charging, recovery, and reclamation processes.

R-32 will also have lower direct emissions due to its lower GWP compared to R-410A. Direct emissions are a combined calculation of the required amount of refrigerant in an HVAC system and its GWP. Figure 1 shows a comparison of direct emissions of an R-410A system with an R-32 system having similar specifications. The chart compares lifetime emissions from a 15 SEER air-conditioner operating in a mild climate over a 15-year lifetime and an assumed leakage rate from both systems. Most systems will most likely not reach that leakage rate during a lifetime, but for the purpose of this analysis we have assumed a leakage amount to highlight the difference between refrigerants. In this case we assume an annual leakage rate of 4% and end-of-life leakage of 15%. 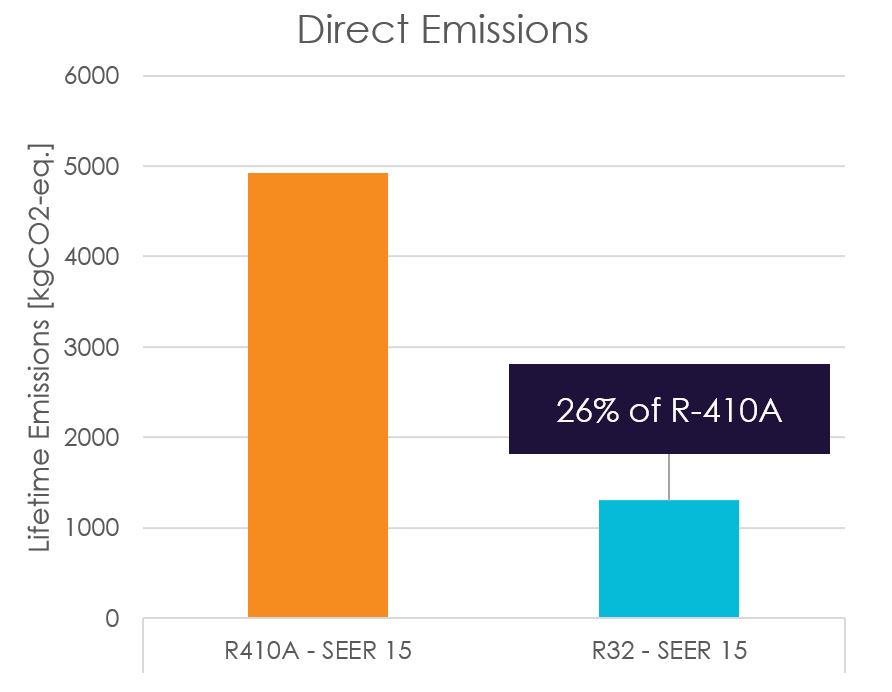 Many HVAC OEMs across the globe have endorsed R-32 for select applications because of these properties. In a published HVAC trade magazine editorial, it was suggested that R-32 could help reduce the carbon footprint by up to 80% in commercial scroll chillers and heat pumps due to its lower GWP and significant charge reduction.9

R-32 has reportedly been used in more than 100 million systems, and more than 40 OEM companies are already manufacturing R-32 systems around the world. That number will likely increase as more countries adopt R-32 as the preferred solution to achieve enhanced indoor comfort in various applications. To that end, Daikin Industries, Ltd., has granted free access and pledged many R-32 equipment patents, to increase the pace of R-32 innovation. R-32 refrigerant can greatly help achieve reduction of detrimental environmental impacts associated with HVAC systems.

Driving the Next Generation of Refrigerants