White Slime Is No Match for an Educated HVAC Technician

HVAC technicians have enemies in the fight for comfort — wet bulb, duct pressure, system imbalance, the list continues. An old nemesis, however, continues to lurk in the system in the form of slime. It’s not the green ectoplasm left behind by creatures from the classic “Ghostbusters” movie; it’s a white substance that clogs the HVAC system and stops it from running properly. This is when customers tromp down to the basement, or wherever their systems are located, to investigate the reason for their discomfort. There, they find white globs of an unidentified slimy substance — the sight of which can turn even the strongest of stomachs. Reaching for the phone, who are they going to call? Tech-nicians.

White slime can be found in several places in an HVAC system. Evaporator pans, drain lines, and condensate pumps provide cool, wet, and dark environments that are hospitable to the growth of microorganisms. The slime that technicians find in an HVAC system, for example, is typically a coating that protects the bacteria colony growing inside of it, according to Donald Prather, technical services manager, ACCA. He also explained that this bacteria likes condensate pans and trays not only because of the moisture, but also because of the dust particles that slip through the filter that are a good food supply. 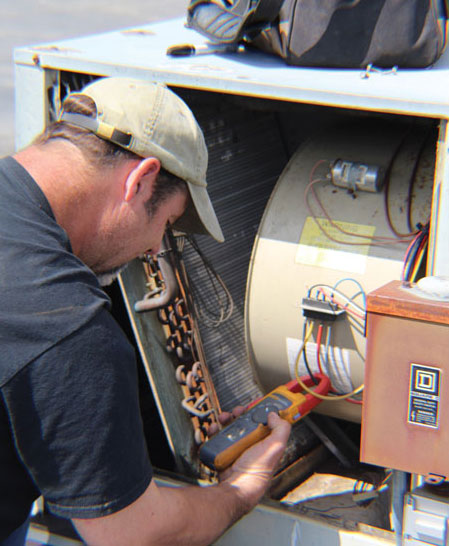 LURKING WITHIN: White slime can be found in evaporator pans, drain lines, and condensate pumps that are hospitable to the growth of microorganisms.

A simple review of high school biology reminds technicians that bacteria are microscopic single-celled organisms. They can be shaped like spheres, rods, or spirals, and they live in virtually all environments. They have the ability to adapt, be it to soil, water, or a living host, and only some of them require oxygen. The pH level optimal for growth is in the neutral range, and temperature ranges can vary based on what region the bacteria resides. Despite these optimal parameters, some bacteria can grow and live in what would seem to be an inhospitable environment.

“Bacteria likes to grow in warm, moist areas, so it can be found anywhere in the U.S.,” said Prather. “When found in a condensate drain pan, it may be a sign of oversized equipment that short cycles and is relatively warm most of the time.”

White slime is common, especially during peak loads in the summer. The bacteria itself is not initially harmful, but its growth and buildup causes varied issues for technicians to address.

Jim Crist is an HVAC specialist for U.S. Heating and Air in Denton, Maryland. He has seen slime prevent proper drainage and then flood the system, causing severe drywall damage from the water that led to mold and mildew within the residence.

“When left unchecked, this can create a real health hazard,” he said.

REMEDIATION IS A PROCESS

Cleaning out the condensate slime requires more than simply removing the visual globs of the organism. There are treatments that will help remove the microscopic elements of condensate slime and prevent its return in the future.

According to Prather, the first item to get rid of is the old a/c filter. This is a common culprit for harboring the white slime instigators. Removing the filter will alleviate the possibility of the bacteria spreading again after a thorough cleaning has been completed.

With the old filter gone, a technician can go to work on cleaning the slime out of the system and its affected areas.

Prather said it is not always as easy as simply using an antibacterial cleaner because of the protective layer that keeps bacteria shielded from those cleaners.

He suggests using a wet/dry vacuum to attach to the outside of the condensate drain and suck everything out of the system. With that complete, he then suggests pouring a half-bleach/half- water solution in the drain pan with the wet/dry vacuum turned on, and then rinsing. Following these steps should remove as much bacteria as possible to slow down regrowth. Prather then suggests cleaning the coil and replacing the a/c filter with a new one.

“Cleanings and maintenance that are generally scheduled semiannually may need to be done more frequently in the cooling season until the bacteria is removed completely,” he said. “Some contractors leave behind tablets that are designed to kill bacteria when they become wet. However, as the tablets shrink in size, some of them may be carried in the water and clog the drain.”

To overcome this, Prather said technicians should locate these leave-behind tablets in a spot so that clogs will not occur.

“Putting them into a container that does not move is a good practice,” he said.

Even though there are several ways to remediate or avoid the white slime altogether, HVAC technicians, along with the homeowners, have to take a proactive role in maintenance and prevention.

“Most of these [white slime] complaints come from the reactive individual: one that does not do preventive maintenance or cleanings,” said Crist. “They wait until the system fails or breaks and then call as an emergency.”

Pleune sees these white slime calls as open opportunities to discuss the importance of maintenance with facility managers.

“Usually, once we help a new customer get their equipment cleaned up, these calls become rare, as the majority of our customers are on preventive maintenance agreements,” said Misiewicz. “We have found that blowing out the drain lines every year, combined with pan treatments as needed, usually prevents the problem from ever happening.”

He did warn, however, that since these elements grow quickly, delaying maintenance can cause severe problems in a short period of time.