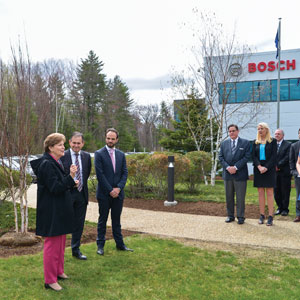 Shortly after attending a bill-signing ceremony at the White House with President Barack Obama, New Hampshire’s senior senator, Jeanne Shaheen, paid a visit to Bosch Thermotechnology on May 1 in recognition of the company’s commitment to producing energy-efficient heating and cooling systems.

The democrat’s bipartisan, cosponsored bill, the Energy Efficiency Improvement Act of 2015, aims to increase energy efficiency by building owners and tenants and calls for energy monitoring of federally leased buildings, among other provisions. During her time at Bosch Thermotechnology, Sen. Shaheen toured the facility, met with Bosch-accredited contractors who were training on-site, and helped to plant a white birch, the official tree of the Granite State, on the Bosch grounds.

“We were excited to welcome Sen. Shaheen to our facility to commemorate enactment of the Energy Efficiency Improvement Act,” said Vitor Gregorio, incoming president of Bosch Thermotechnology Corp. “As this was my first official day as president of Bosch Thermotechnology Corp., I was especially pleased to welcome the senator, and, at the same time, bid farewell to outgoing president Richard Soper. We expect this is just the beginning in enacting meaningful legislation to encourage energy efficiency in the homes and businesses across the U.S.”