Many facilities in the health care sector are particularly dependent on maintaining stable environments within various structures, where steady room temperature and humidity are critical factors.

In the pharmaceutical industry, for example, laboratories, manufacturing, and storage facilities, sometimes containing many millions of dollars of inventory, need to maintain climate control around the clock. In some cases, deviations outside specific limits can endanger products and trigger costly regulatory and compliance issues.

In hospitals and other medical treatment centers, the dependency on stable HVAC systems can be just as complex, involving not only human comfort but also the reliability of sensitive instrumentation and data-related equipment.

While there certainly are other HVAC considerations in the mix, many of these facilities are reliant on cooling towers to support their indoor environments. If a cooling tower requires unplanned downtime, this can significantly affect the operating “health” of a structure, its occupants, and operating equipment.

In many instances, the nemesis of a conventional metal-clad cooling tower is corrosion. Vincent Chiocchio, president of HVAC systems contractor Controlled Air Inc., Branford, Conn., noted that this is not an issue with the plastic cooling towers his company installs.

The plastic cooling tower to which Chiocchio refers is an advanced technology that eliminates the problems of corrosion and also enables additional maintenance and other operational savings.

A high-density polyethylene (HDPE) tower is not only impervious to corrosive water treatment chemicals, but also to corrosive elements that are often present in the air, whether harsh chemical vapors emitted from nearby industrial plants or natural corrosives such as salt air.

But there are also other, more performance-related advantages to these HDPE cooling towers. 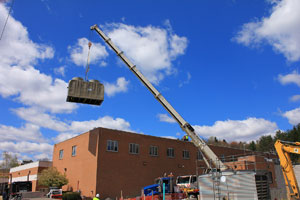 In 2012, Controlled Air designed and installed a cooling tower and chiller system for a pharmaceutical R&D facility located in Cheshire, Conn. While the longevity and dependability of the cooling tower were the priority requirements, the customer was also highly interested in design flexibility and operational economies.

“This design featured four fans and motors, and we liked that redundancy because it meant that if we lose one fan, the cooling tower is still going to continue to operate,” Chiocchio said.

The fans are equipped with direct drive motors, which promise added energy savings as well as lower maintenance costs.

“Also, the fan motors are low horsepower for the cooling tonnage, so that goes back to the point on savings. Also, this building has some LEED accreditation, so the horsepower per ton of cooling was a concern,” said Chiocchio.

He added that the Delta 600-ton TM Series model was specifically selected for this application because it was a modular type of design. “With this design we could add a second 600-ton unit if additional cooling capacity is needed in the future.”

Chiocchio noted that there was a need to ascertain the water treatment situation, so he discussed that situation with the customer’s service provider.

He found out that “the amount of chemicals needed for water treatment would be substantially reduced. In the overall, there actually has been a significant reduction in the chemicals, and, of course, a corresponding savings.”

In a recent energy upgrade project, contractor Climate Control Mechanical Services (CCMS) of Florida was asked by its customer, a medical offices and patient treatment center, to provide a three-year payback on the replacement for a chiller system with a highly reliable cooling tower.

“We were looking for simple installation, some model that gave the owner the performance they were paying for, from both a price point and performance standpoint,” explained Rob Boyer, vice president of CCMS operations.

CCMS performs service and mechanical construction of HVAC systems throughout Florida and the Southeast, handling projects ranging from a few thousand dollars up to millions of dollars.

“My engineer proposed using Delta Cooling Towers for this project,” Boyer said. “I had never used one of these designs before, but the durability and reliability factors looked good, and the pricing was good, so we went ahead and purchased two Delta T100 100-ton cooling towers.”

Boyer said that Delta also supplied the pumps, which arrived as a package with the cooling tower on a skid, which was convenient. Plus, the system was relatively easy to install.

As far as performance is concerned, the HDPE cooling towers appear to be living up to their reputation for durability and reliability.

“So far, there have been no problems at all. And that’s important because we can’t have any downtime with this. A/c is not necessarily a critical use need everywhere, but down here in Florida, it is.”